Getting up to speed with Menlo Park Police Chief Robert Jonsen, who’s hit the ground running 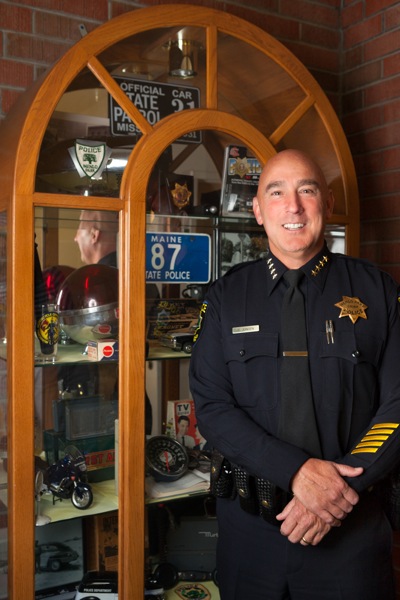 Menlo Park Police Chief Robert Jonsen has been on the job for about six months now. “I feel like I’m home, even though I didn’t grow up here,” he says.

Bob, as he’s known, spent 27 years with the Los Angeles Sheriff’s Department, most recently as captain of the Lancaster station. “My personality is more suited to this smaller environment,” he says, although he credits his former department with the training he’s received. “I really feel at peace. And the transition has been extremely smooth, although a bit less so for my wife, who grew in Southern California. I give her a lot of credit for being willing to leave the area where our children and grandchildren live.”

The Chief says that the educational level of people in Menlo Park was one of the reasons that prompted him to apply for the position. “This area is known for innovation and being forward thinking,” he says. “People are willing to try new things. And that’s important because law enforcement is changing. I believe we can become more efficient through the use of social media and technology.”

Given that focus, one of Bob’s first initiatives was the formation of an Advisory Group, which had its first meeting at the end of July and will get together monthly going forward. He set it up to “have an unfiltered dialogue with people in the community.” 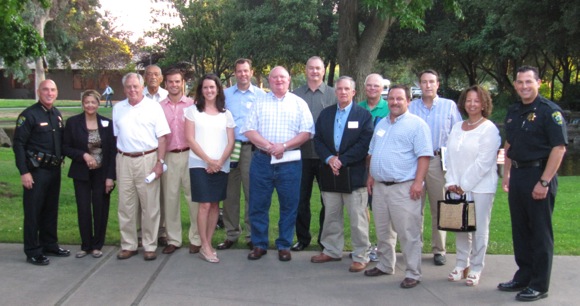 “I didn’t do any direct recruiting for this group,” he says. “Instead we put the word out that we were accepting applications. The amazing thing is that we have representative from each of Menlo Park’s 20 different neighborhoods.”

Taking the MPPC Chief’s position is a homecoming of sorts for Bob, who grew up in Marin County. His father was a police officer in San Francisco who transferred to the City’s fire department. Bob left home to attend college in Southern California and never thought he’d stay there nor did he think he’d have a law enforcement career.

“But I had two buddies who were with the Sheriff’s department, and they urged me to apply,” he says. “Over the years, my father would send me articles about retiring Chief’s with a note that maybe I should look into applying,” he says. “And this time, the timing was right!”

I am very proud of you, Bob. You have always put people first and that’s what I admire and love most about you. You also think “outside the box” — a trait that is so crucial to personal and professional growth. And you are excited when you experience a shift in paradigm, and in return that excites me. We are a team, Bob, and we are growing together. We are a united front with 49 years of policing experience, if you were to add up our two careers, and that translates to understanding each other as well as the needs of the officers and civilian employees of MPPD and the citizens of Menlo Park. Thank you, Menlo Park, for welcoming us and supporting my husband. You are providing him the tools that are so very necessary to serve the community effectively and efficiently. Respectfully submitted, Kristie Jonsen

I have known Bob Jonsen as a friend and neighbor for over 20 years. His dedication to law enforcement and serving community is so admirable. We truly miss him here, but realize his talents will be so useful to the City of Menlo Park. They are so lucky to have him…Good luck to Bob and Kristie and their new adventure.