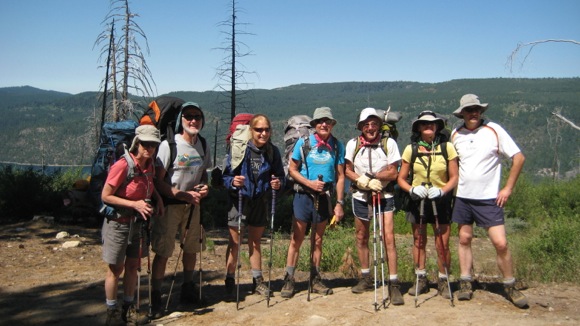 My backpacking trip this summer was one of the most difficult I’ve ever experienced. Seven of us set out to conquer the wilderness between Kibbie and Many Island Lakes in the southwest corner of Yosemite National Park, but we failed. The distance between these lakes is only about two miles as the crow flies, and the net elevation gain is only about 800 feet. Here’s the story.

We launched our adventure from Shingle Spring, a trailhead just east of Cherry Lake (4702’) in Stanislaus National Forest about 10 miles west of the Hetch Hetchy Reservoir. In the photo (top) are (l to r) Leslie, Martin, Esther, the author, Steve, Martha and Axel. We’ve all been together on one backpacking trip or another in the past.

We covered the 4.3 mile trail to Kibbie Lake (6513’) in about  three hours, with another hour spent looking for a campsite on the south side of the lake. Kibbie is a beautiful natural lake, clear of logs, with a smooth, hard bottom —perfect for swimming. Across the lake is Kibbie Creek, the outflow from Many Island Lake (7325’) to the north. There is no trail to Many Island, but we thought we’d just follow the creek. However, the mouth of the creek is pretty inaccessible, having high granite cliffs dropping into Kibbie Lake on both sides.

We set out the next morning (Day 2) to hike around the 7000’ mountain on the northwest side of the lake, choosing a route with a long, relatively gentle ascent. After lunch near the top, we began our descent to the creek — lots of sliding over rocks, sometimes fighting scrub oaks (not fun!). Finally we reached the creek only to find there was no flow, presumably due to the dry winter. This was to be our only source of drinking water. Luckily there were still a few stagnant pools where we could fill our bottles with filtered water (photo above).

It was only about 2:00 pm, so we started upstream, hopping rocks, fighting brush. On both sides of the creek were steep granite cliffs. After a quarter mile we realized this was hopeless. We decided to abandon the attempt and instead follow the creek back to Kibbie Lake and camp there for the night. Easier said than done! That became a real slug fest. Finally about 6:30 pm, fairly exhausted, we entered what happened to be a nice lakeside campsite.

On Day 3, not wanting to have to retrace our steps up the creek and over the mountain, we decided to try going the other direction around the lake. We managed to get around behind the first big granite cliff (we named it alligator rock, see photo below), then started hiking near the edge of the lake, but eventually realized that this too was impossible. Earlier in the day we had passed another nice campsite on the lake’s edge, so we hiked back there and had a nice afternoon swimming and baking in the afternoon sun (very little shade). 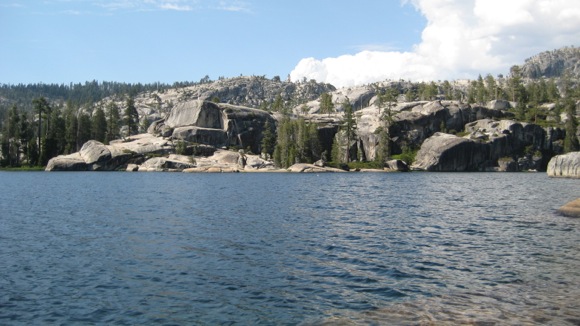 Day 4 was spent getting back to the Day 2 campsite. You might ask why these campsites exist if the area is so inaccessible? The answer is that some hearty souls carry inflatable rafts up to Kibbie Lake (along with all their other gear) and paddle across the lake. We chose to camp here at a known location in order to prepare to retrace our steps from Day 2.

Day 5 was thankfully overcast. We got up early, left camp about 9:00 am, hiked up Kibbie Creek, refilled our water bottles at the same stagnant pool as on Day 2, then began climbing (see photo below). It was a tough climb, but not particularly dangerous — although one hiker tore a shoulder muscle when his hiking pole unexpectedly collapsed. 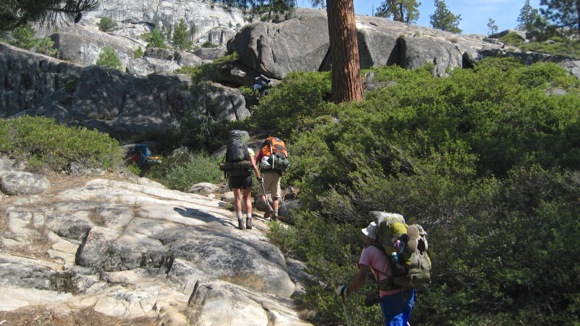 We again had lunch near the top, then got to our campsite on the south shore by mid-afternoon. We had originally intended to hike on over to Cherry Creek to the west, but now we had expended all our time. So the next day we hiked back to the trailhead and drove home.

In summary, the hiking was rather exhausting, we didn’t get very far, but there were certainly some delightful moments. Kibbie Lake is not such a bad place at which to get stuck.

Editor’s note: Do you have a summer adventure that you’d like to share?  Send you ideas to tips[at]inmenlo.com.

I’ve tried getting up Kibbie Creek myself years ago and ran into the same problem. That’s some rough country there. Next time I go back to Kibbie I plan on attempting it again. But you are correct, Kibbie Lake is definitely not a bad place to be stuck at.

It is indeed unexpected to find such a harsh terrain where the map only suggests gentle grade. We did it in reverse two years ago with two friends, first going over Kibbie ridge up to Mercur Peak, and down to Many Island Lake without difficulty. We then went down Kibbie creek to Kibbie lake, assuming an easy stroll but ended up loosing a lot of time bushwacking. We found a nice campsite somewhere around what you describe, near the mouth of Kibbie creek, by a granite cliff on the south shore, that we painfully contoured the next morning (awful and a bit dangerous bushwacking until we found a bear trail). I wish I had read your post before we got into this mess 🙂