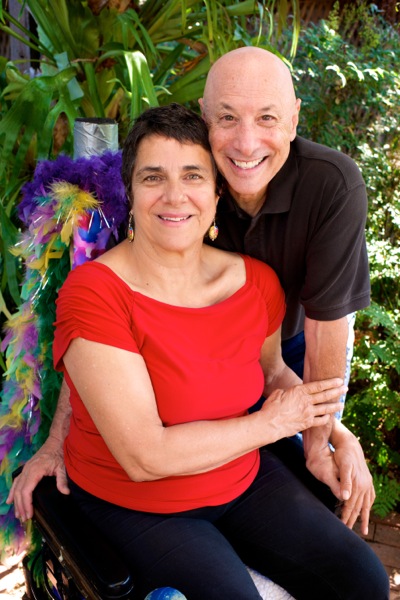 Menlo Park residents Molly and Jeramy Hale founded their non-profit, Ability Production in 2004 so that others could be, like Molly, a “statistical outlier.” She suffered a broken neck in an automobile accident in 1995 and was told she would never have voluntary movement below her shoulders. But she has defied the odds.

“Even when I was lying in the hospital right after the accident, I fought to be a person, not a patient,” Molly recalled.

Her story has been chronicled in the documentary Moment by Moment by Emmy Award-winning film maker (and fellow Menlo Park resident) Dorothy Fadiman. She’s gained functionality through a combination of breathing, aqua-therapy, horse therapy and wheelchair Aikido — not to mention a determined spirit and supportive spouse.

The Ability Production website features a wide range of free resources not just for the target audience of people with spinal cord injuries but others who find themselves facing a temporary or permanent physical disability. There are also a number of PodChats where Molly addresses various aspects of dealing with quadriplegia.

To date, their non-profit has been angel- and self-funded but that will change with a planned benefit concert on September 21 starring the Grammy nominated jazz pianist and composer Taylor Eigsti. “We are very happy that Taylor, who grew up in Menlo Park, is donating his talent and time to support our fund raising efforts,” said Jeramy, himself a pianist who’s long been involved with The Jazz School in Berkeley. Tickets can be purchased online.

Not surprisingly, the Hale’s home is fully accessible. It’s something that they feel more homeowners should think about — before an actual need arises. “When you have barriers like steps instead of ramps, you may be preventing family or friends from visiting,” said Molly.

Added Jeramy, who consults on Universal Design: “Not everything has to be done at once. Just take a look around. Is there at least one entry that a wheelchair could pass through? Is there also one bathroom door wide enough? Taking small modification steps can also result in increasing your home’s value.”