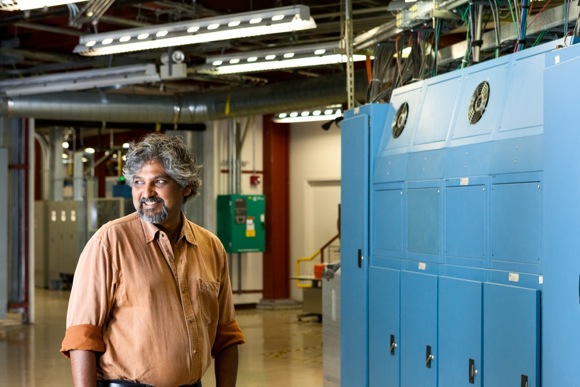 Apurva Mehta, a material science physicist, came to SLAC National Accelerator Laboratory in Menlo Park 17 years ago “to build a beam line” — one that is still up and running, he points out.

“SLAC was the birthplace of synchrotron science in many respects,” he says. “That was certainly key to my decision to come here. All the new things were happening here — and are still happening here.”

While Apurva was involved with the birth of the first x-ray laser — his boss was one of the main drivers — he cites a number of other ways he’s made a contribution at SLAC. For one, he’s part of a committee that recommends scientists for SLAC’s public lectures series.

“But I also think my contribution has been around finding new people,” he says. “Seventeen years ago when I came here, most of the people were x-ray jocks — people who knew the nuts and bolts and thrived on that. Today, the area of science has broadened to include chemists, biologists, and archeologists.

“We’ve really tried to make this place more widely accessible. We work with them and show them how they can use the lab’s tools to advance their work.”

As a current example, he cites a joint project of SLAC and Stanford’s medical and engineering schools that involves designing stents. “They come to us with a huge amount of knowledge about how to make stents — we’re not going to tell them how to make them better.

“When a stent is inserted in an artery, it changes the artery. When it’s in the neck and you push on it, you want to make sure it bounces back when you press on it.

“We try to figure out why stents work in a certain way, so that they can go back with that knowledge and build on it. In that way, it’s a very collaborative process.”

That area of work may surprise people who think of SLAC as a place that smashes atom, which the lab doesn’t do anymore. “Our work here covers the breadth of the largest structures of the universe to the smallest — the basic science stuff and the applied.

“There’s a story that’s told around here about someone asking Panofsky [W.K.H. “Pief” Panofsky, founder and first director of the lab] in the early 60s — when SLAC still had the largest linear collider in the world — ‘What are you going to be doing 10 years from now?’ He replied, ‘I don’t know but I do know it’s going to be different.’

“We’re still writing reports on what we’re going to do in the future. But the fun part is that we really don’t know!”