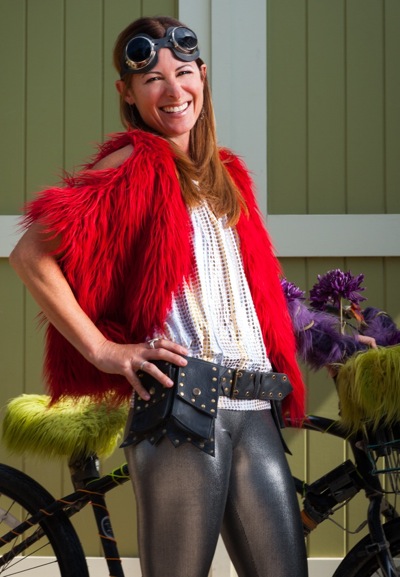 Menlo Park resident Jill Smith attended Burning Man for the first time this year — and she took her empty nest with her, along with a couple of dozen costumes she designed and sewed herself.

“Both of my kids are away at college now,” she says. “While they were growing up I put a lot of energy into school-related volunteer work for the Menlo Park-Atherton Education Foundation and then M-A. That’s why I built a nest on the handlebars of the bicycle I took with me to Burning Man. It symbolizes a new phase of my life.”

Jill’s interest in attending the annual event held in the Black Rock Desert of Nevada was piqued when she saw the documentary film, Spark: A Burning Man Story. “It was really inspirational,” she says. “I was fascinated by the idea that you create all of this art and then you burn it, leaving no trace.”

A seamstress since the time she was a little girl, Jill had made her children’s Halloween costumes over the years but creating two costumes a day for the eight-day event was a much more daunting task.

“This was one of the first things I did completely for myself,” she says, “and I loved it. Now the costumes serve as of memory of my experience. 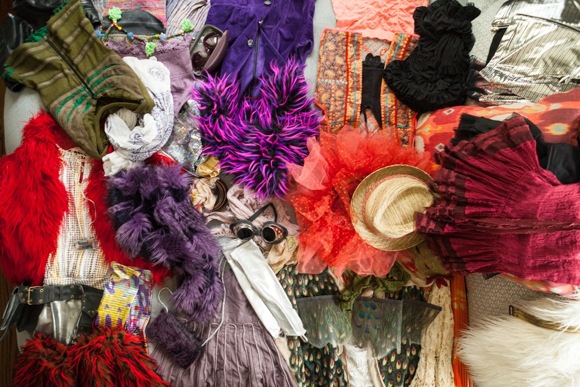 She says her favorite was a vegan leather dress that she sewed 40 feet of “el wire” onto, with a battery pack and controller that allows the lights to blink to the beat of the music. “That’s what I wore the night of the burn and danced until dawn.”

(Note: Photographer Scott R. Kline, who also attended Burning Man this year, photographed Jill in the daylight, so she selected another of her favorites to model as the lights would not have shown up.)

In preparation for attending her first Burn, Jill hosted both a bike decorating and costume making party. In keeping with the Burning Man 10 principles, her campmates — she was part of The Gecko camp — shared her costumes.

“I enjoyed the whole experience so much,” she says. “I feel proud to be a part of the Burning Man community, and I’m definitely going back. I’m thinking I may want to build my own yurt next year!”

There will be annother showing of “Spark” at theRedwood City Theater on the 22nd.

There will be another showing of Spark in redwood city this month. It only happens if we get enough people to buy tickets in advance. No charge if it does not happen.