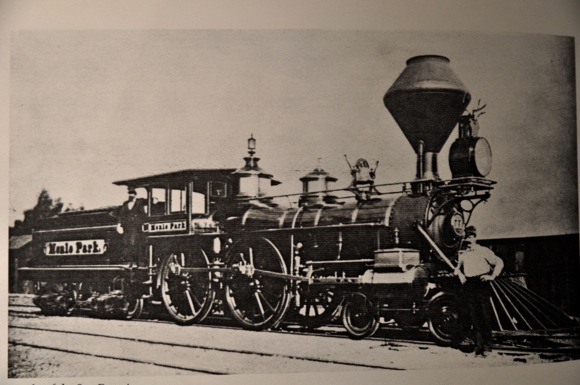 On October 17, 1863, the construction of the rail line for the San Francisco and San Jose Railroad was completed from San Francisco to Mayfield. A festive train brought 400 dignitaries, including Gov. Leland Stanford and Gov. A. C. Gibbs (Oregon), to a grand picnic just north of the San Francisquito Creek in today’s Menlo Park. (Note: The rail line was completed all the way to San Jose in January 1864, but management invited notables including Gov. Stanford for a VIP train ride when construction was about two-thirds complete.)

A 150th anniversary celebration, which includes a reenactment of that picnic with costumed actors, will take place this Saturday at the Menlo Park train station between 11:00 am and 3:00 pm. There will also be an authentic 19-century-style band, model railroads and exhibits, and displays including a Wells Fargo stagecoach, a vintage bus and a replica of the transcontinental railroad’s famed gold spike.

The new organization, Two Menlos, will be distributing information about the new friendship relation with Galway City at the Menlo Park History Association table. Mayor Padraig Conneely and the rest of the Galway City visitors should be there at least part of the time. 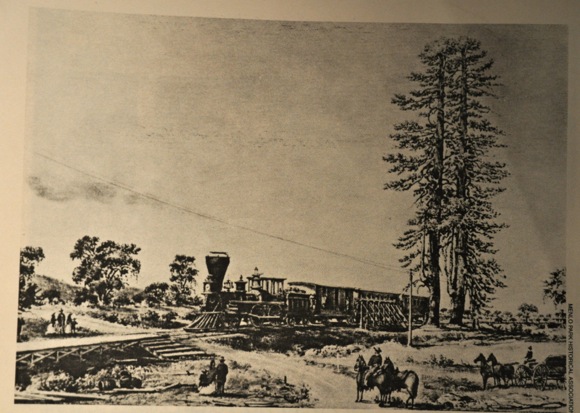 Before the rail road line was established,  it took eight hours to travel by stage from San Francisco to San Jose, alternately five hours by boat to Cooley Landing (now in East Palo Alto) and then stage to SJ. The railroad reduced that journey to three hours.

The initial schedule was a daily train leaving SJ at 8:00 am, then leaving SF at 4:00 pm. The cost was about 5 cents/mile. The journey between SF and MP took about two hours,  so one could actually commute from MP with a six hour workday in SF.

This led to an explosion of large homes being built in the MP area by the wealthy SF residents. Most of these large homes were used only in the summer.

Today the interior of the depot is leased to the Menlo Park Chamber of Commerce, but the open shelter on the north end (added during the Camp Fremont era, i.e., during WWI) is still available to passengers.

The Southern Pacific was consolidated into the Union Pacific in September 1996. Menlo Park’s railroad depot, built and opened in August, 1867, is the 2nd oldest depot in continuous use in California. Caltrain’s Santa Clara depot was built by the San Francisco & San Jose Rail Road in 1863 and was reported by Clyde Arbuckle to have been in use by December 24, 1863. It was in regular use in January 1864 and ever since then.