Menlo Park resident Nalin Decker grew up in Thailand, but it wasn’t until she was living there as an adult with her husband Mark that she really noticed the many children begging in the streets.

“I was pregnant with my first child,” she recalled. “We did some investigating and found out that it wasn’t that the children were poor and needed to help their families. The begging was a result of human trafficking. The children had been lured by gangs and told to beg.”

That discovery led the couple to found a charitable foundation called DASchild in 2007. “The mission is to save the children before anyone gets to them, and free children who are already involved,” explained Nalin.

Returning to Thailand once a year with their children, the Deckers also partner with the Ban Nana Shelter. Yesterday they hosted an open house with three other local families — all who will be traveling to Thailand this holiday season — where attendees could “adopt” a Thai child. 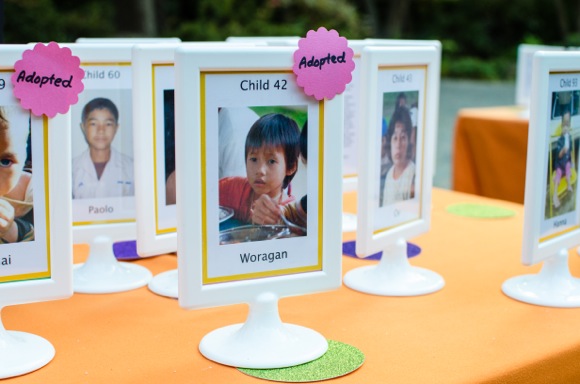 “We’ll be traveling to the shelter in northern Thailand on Christmas Day,” said Nalin. “There are about 80 children there, many of whom are orphans or have been subjected to human trafficking. We’ll be hosting a Christmas party as well as bringing each child a small gift, a pillow/pillowcase (most sleep on bamboo cots) and a sweatshirt — it gets cold in northern Thailand.”

Displayed at a the open house were photos of the children housed at the shelter. Nalin explained that just $15 provides a child a holiday gift and that $30 feeds a child for a month.

People who are interested in helping the four local families bring Christmas to Ban Nana Shelter children can donate through the DASchild Foundation website.

Where do you live that you see many children begging in the street? I ask because I have been living in Thailand for 12 years, a few years in a Bangkok suburb and the rest in a medium sized town up-country, and I have only seen children pan-handling one time. I’ve seen a couple of stories about gangs who take kids and force them to beg in tourist areas. But I have never seen it my travels around the country. Based on the few news stories and my own observations it would seem these cases are quite rare.