M-A classmates remember “where were you?” on Nov. 22, 1963, when Kennedy was assassinated 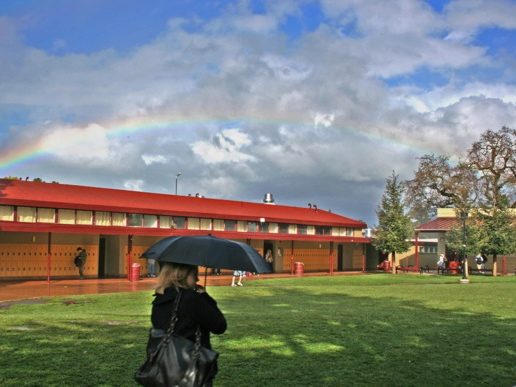 We were sophomores at Menlo-Atherton High School on Nov. 22, 1963, the day President John Kennedy was assassinated. We may have thought we were sophisticated young citizens of the world — if we had a thought at all.

In reality, while we’d already had one scare in high school — the Cuban missile crisis the previous Fall — we were largely sheltered from the larger world, cocooned in a Leave-It-To-Beaver like existance. (That TV family comedy began its run when we were in grade school and aired its final episode in June of ’63. Some of us were lucky enough to have mothers who had cookies and milk waiting in the afternoon, even in high school.)

But we were old enough to remember where we were when we heard the news. Last names have been withheld to protect our sophomoric view of the world!

Michael: I was one of the first ones to hear about it. When I brought the attendance record down to the office, it was on the radio. Everybody was sitting in the office not moving and hanging on every word on the radio. I returned to my social studies class and was promptly sent back to the main office to request that the radio be put on the school’s PA system so we could all listen.

Terri: I clearly remember being in my Biology class with Mr. Karcher. It was announced over the intercom, I think.  I remember being off campus with someone and calling my Mom (must have called from a phone booth!), wanting to go home. Ginnie told me to get back to school and finish the day, and that we would talk about this very sad tragedy when I got home.

Cathy: I was as in journalism/yearbook class with Marsha R. and Geoff K. when the announcement that the President had been shot came over the loud speaker. Since I was dating Pete Ready (pictured above right who was M-A president) at that time, I immediately thought it was he who had been shot. Yes, that is how small my world was then! Anyway, it didn’t take long for us to surmise it was much more serious.

Rob: I remember being in Mr. Moser’s U.S. History class sitting next to Cindy S. I think an announcement came over the PA. Then we went to lunch in Jay’s mom’s yellow convertible Corvair, listening to all that was coming across the radio. We really couldn’t believe what was happening.

Alice: I remember exactly where I was sitting in Paul Olette’s French class: second row, third back. . . right in front of one of the Marchant twins, can’t remember his first name. The announcement came in and you could hear a pin drop. It was interesting to see Olette’s body language. He was Belgium, maybe French. He looked so very troubled, which really frightened me. Some students just got up and left. I felt at a loss. I remember thinking: What shall I do?

Dennis: Tom F. and I had cut school and we were hitch hiking to Santa Cruz. We got a ride with an Afro-American guy who was telling us about the assassination, and we could hardly comprehend what he was saying or what was happening.

I was in Paris, France, visiting the author William Saroyan when Kennedy was killed. It was 7 PM in evening there, and Saroyan got a call from a friend of his in the US. We heard Saroyan say, “Thaat’s the most hocking thing I ever heard!”
In 1966 I went with Warren Commission critic Mark Lane, and film director, Emile de Antonio to Dallas to interview witnesses to the assassination. I was 23 years old, just a chip of a laddie. I was amazed by what the witnesses told us! Do I have stories!!
Just lately Mark Lane has indicted the CIA in the JFK killing in his book LAST WORD. I much, much recommend it.
Our film came out as RUSH TO JUDGMENT, and came out in video as THE PLOT TO KILL JFK.