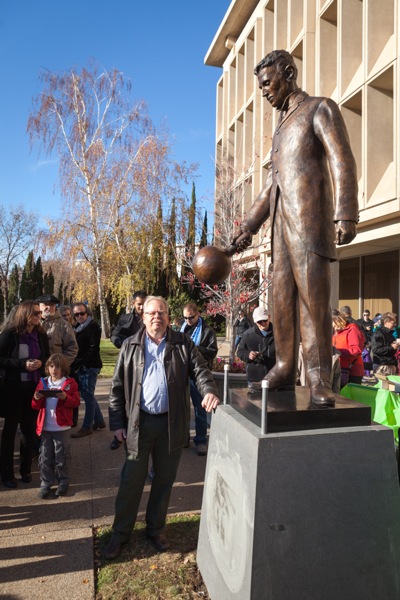 A statue of the inventor Nikola Tesla sculpted by Menlo Park artist Terry Guyer, which is equipped with free Wi-Fi and a time capsule to be opened in 2043, was unveiled this past Saturday (12/7/13) to an appreciative audience. The statue is seven feet tall with a four-inch bronze base and stands on a 42 inch pedestal.

The statue is the result of a successful Kickstarter campaign organized in May 2013 by Northern Imagination, a Palo Alto-based company started by entrepreneur Dorrian Porter. The campaign raised more than $127,000 in 30 days from 722 people and included a final hour contribution of more than $20,000 from an anonymous family foundation which helped it cross the finish line.

The entrepreneur visited two Menlo Park schools to collect predictions for the time capsule to get a kid’s eye-view of the future. 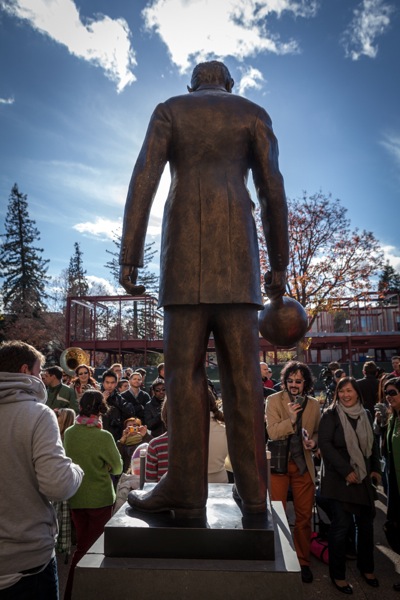 The statue was cast using the lost-wax bronze casting method by Artworks Foundry in Berkeley. Local developer Harold Hohbach is providing the commercial property on which the statue can be seen (260 Sheridan Ave., Palo Alto).

During the campaign Northern Imagination produced a short animated video using GoAnimate imagining what it would be like for Nikola Tesla to pitch modern VCs.  This video spread rapidly on social media, particularly among the startup community, generating over 230,000 views in a short space of time.

The inclusion of free Wi-Fi is fitting for Nikola Tesla, who some say dreamed of creating a more efficient system of wireless power for the entire planet. Nikola Tesla’s inventions are widely credited as a critical part of the foundation of modern electricity transfer and wireless data transmission.

“This unique project pays respect to a great inventor who never had the historical recognition he deserved,” says project organizer Dorrian Porter. “But it also is intended to inspire the entrepreneurs who come to the Silicon Valley to think big and selflessly — as Tesla did — on important opportunities like energy and wireless. The free exchange of information and affordable access to sustainable energy have the potential to solve the critical issues of poverty and education, and inspire peace.”