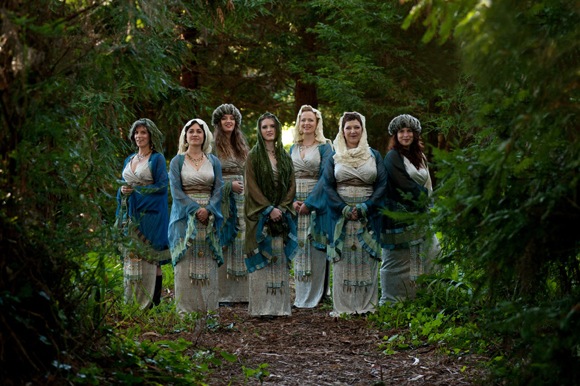 Women’s vocal ensemble, Kitka, will be appearing at St. Bede’s Church in Menlo Park on Dec. 15 as part of  its annual Wintersongs tour.

Wintersongs showcases seasonal music from a wide variety of Eastern European ethnic and spiritual traditions. Subtitled “A World Unknown”, this year’s program features an unexpected new element, folk polyphony from the American South. The phrase “A World Unknown” is drawn from the lyrics of “Idumea”, an 18th-century hymn from the American Sacred Harp tradition. Kitka will weave “Idumea” together with a song in a similar haunting pentatonic scale from the mountainous Epirus region of Northern Greece.

Another new offering is a song from the Bosnian-Muslim ganga tradition which captures the spirit of families reuniting to sing during the holidays. “We immersed ourselves in the ganga song-form during our recent collaborations in California and Serbia with Balkan traditional singer Svetlana Spajic,” explains Kitka’s Executive Artistic Director Shira Cion.

“Ganga songs are often sung in praise of the happy themes of home and kin. Yet, ganga is probably one of the most controversial musical forms in former Yugoslavia,” continues Cion. “It is sung in mountainous regions by both Orthodox Serbs and Bosnian Muslims. Urban dwellers tend to dismiss ganga as primitive, cacaphonous sound while rural people consider it their most expressive form of music-making. The singers and their active listeners achieve maximal harmony through dissonance. Imagine the most extreme possible sonic contrast to ‘Silent Night’, and you’ll hear something like ganga.”