St. Nicholas visits Trinity Church in Menlo Park, as he has for 30 years 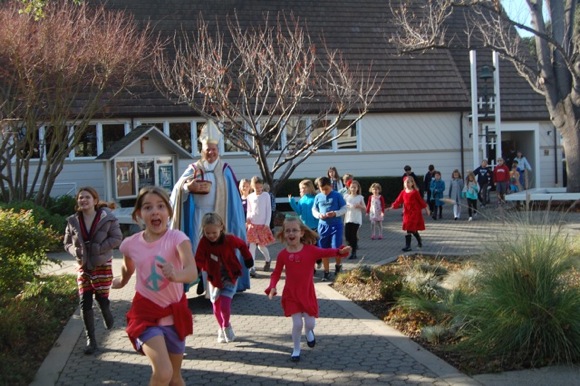 Menlo Park may have many Santa Clauses but we’re pretty sure St. Nicholas makes an appearance at only one place. As he has for three decades (now that must be a record!), St. Nick, as portrayed by Dick Livermore, visited Trinity Church on Sunday morning. That St. Nick doesn’t wear a red velvet suit may be a surprise to some. So, to set the record straight, here’s all the background you need, courtesy of the St. Nicholas Center: 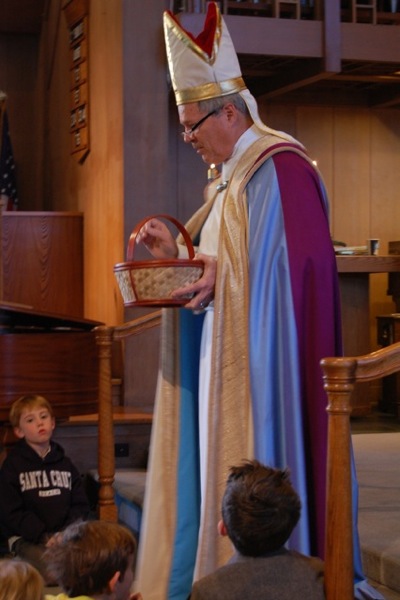 “The true story of Santa Claus begins with Nicholas, who was born during the third century in the village of Patara. At the time the area was Greek and is now on the southern coast of Turkey. His wealthy parents, who raised him to be a devout Christian, died in an epidemic while Nicholas was still young. Obeying Jesus’ words to ‘sell what you own and give the money to the poor,’ Nicholas used his whole inheritance to assist the needy, the sick, and the suffering. He dedicated his life to serving God and was made Bishop of Myra while still a young man. Bishop Nicholas became known throughout the land for his generosity to those in need, his love for children, and his concern for sailors and ships.

“Under the Roman Emperor Diocletian, who ruthlessly persecuted Christians, Bishop Nicholas suffered for his faith, was exiled and imprisoned. The prisons were so full of bishops, priests, and deacons, there was no room for the real criminals—murderers, thieves and robbers. After his release, Nicholas attended the Council of Nicaea in AD 325. He died December 6, AD 343 in Myra and was buried in his cathedral church, where a unique relic, called manna, formed in his grave. This liquid substance, said to have healing powers, fostered the growth of devotion to Nicholas. The anniversary of his death became a day of celebration, St. Nicholas Day, December 6th (December 19 on the Julian Calendar).

“Through the centuries many stories and legends have been told of St. Nicholas’ life and deeds. These accounts help us understand his extraordinary character and why he is so beloved and revered as protector and helper of those in need.”