We first visited  Zach Waibel and Meagan Carabetta — the duo behind Tricky Software — a couple of years ago at their offices in downtown Menlo Park. Since that time they’ve been busy developing a new line of products for Crayola called DigiTools used to create art on iPads. Given that tools are best used,  a couple of girls who are fourth graders at Oak Knoll School met us there (with their parent chaperone). 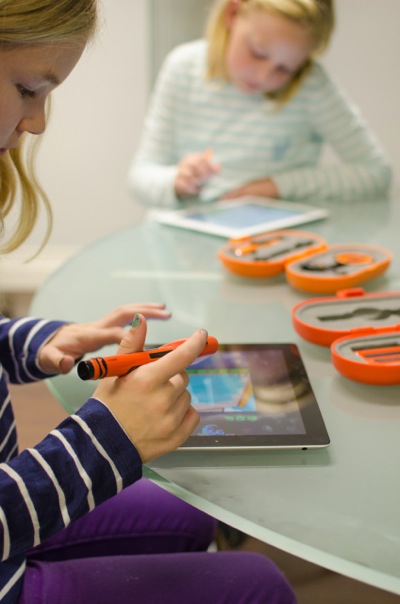 They worked on their art projects while InMenlo contributing photographer Rebecca Flanagan snapped away, and we talked with Zach, who said the latest products combine digital apps and physical tools, “making them more fun to use.”

“The newest is Crayola Digital Paint, which is really neat because it’s focused on mixing colors together,” he added. “You draw with the colors you actually created. It’s for Android as well as iPad.”

The developers at Tricky Software are also busy finishing up their second Emma and the Inventor game called Resonance. “The first Emma was a big hit for us,” said Zach. “It’s a mystery adventure game played mostly by woman 20 plus. Emma is now older and living in Paris. We were shooting for a pre-Christmas release but it’s more likely now it will be just after the first of the year.”