Elena Battles brings dogs and owners together through Wagaroo.com 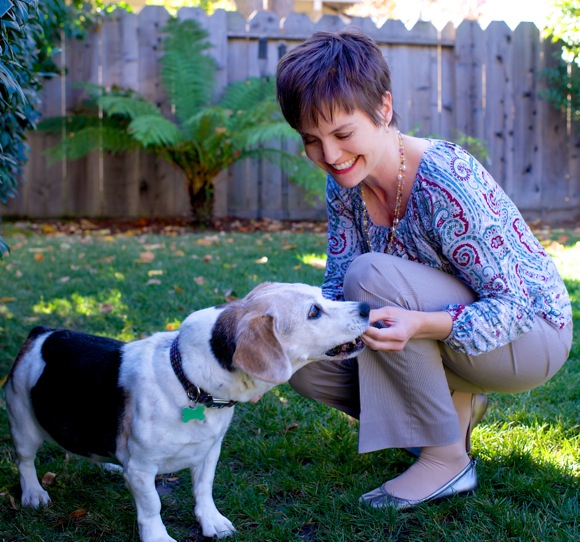 What’s a Wagaroo? According to Menlo Park resident Elena Battles, it’s the mix of a happy dog’s tail motion and the signature “aroo” howl of a beagle. Elena says it’s also a word “that makes you smile,” and Elena will have an even bigger smile if her matchmaking pet service  Wagaroo.com is a success.

In Wagaroo terms, success means matching consumers with puppies and dogs from ethical sources. Elena defines ethical as shelters and rescues, responsible breeders and owners who might need to re-home their pets.

“The overarching goal here is how do we keep people from getting puppies from puppy mills,” Elena says. “The Internet is full of false advertising from puppy mills.These are companies that raise dogs in crowded, inhumane and dirty conditions and sell unhealthy pets.”

As Elena points out, there isn’t one place dog seekers can go to find their ideal pet. “Too often, the process of finding a dog is confusing, time-consuming and it’s not that fun. That’s just the opposite of what it should be. It’s difficult to find what you’re looking for in a short window of time, so people make impulse decisions that can lead them to puppy mills.“

Elena and Wagaroo co-founder Christine Exley are on a mission to make it easier for people to do the right thing. After launching Wagaroo in 2012, they used Indiegogo to crowd fund new features on Wagaroo, which will roll out in early 2014. “We have easy search filters. Is there a certain size of dog you’re looking for? A certain breed? Would you rather get a dog from a shelter versus an owner or a rescue? And if you’re looking for a breeder, there’s an easy way to email us right away so we can help match you up with someone. We just make it super easy for people, and they get to see lots of great pictures of puppies and dogs in the meantime.”

Wagaroo partners with the San Francisco SPCA and Humane Society Silicon Valley. “So you’ll see their dogs listed there,” says Elena. A quick glance at Wagaroo’s homepage reveals nearly 160 hopeful doggy faces. “And we have those constantly updated, so the dogs you see on the website are the dogs that are in the shelter at that time.”

Elena dates her own animal pedigree to a pivotal moment in 1999. She was working as a physical therapist in Texas when an abandoned beagle captured her heart — and effectively changed her life course. “I adopted her on the spot,” recalls Elena. “I was looking for what was next for me, and that experience reminded me that I loved animals.”

With “Trini the Wonderbeagle” in tow, Elena’s new calling led her to shelter volunteer work, fostering, animal shelter administration and eventually to Stanford Business School for her MBA. After serving as COO of Humane Society Silicon Valley, she stepped back to spend more time with her family and struck upon the notion of Wagaroo. “When the idea hit, I just wanted to take advantage of the opportunity,” she says.

Elena says Wagaroo will initially focus on the Bay Area to prove their approach can work — with the longer term goal of expanding nationwide. “We are a place where people care about where things come from — whether it’s their eggs, their vegetables, their meat or their clothes. We just want to provide that same service for pets,” she says.