M-A’s New Voices for Youth needs to raise final $1,320 before midnight to continue 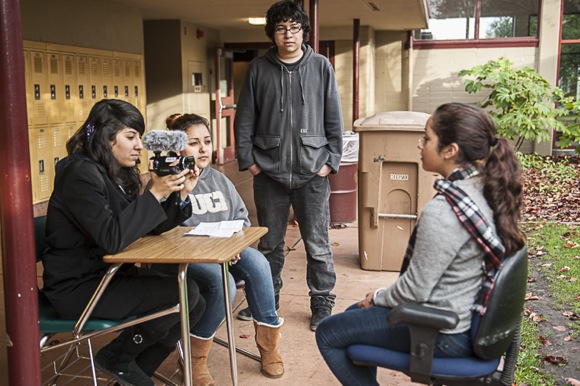 M-A mom (and InMenlo photographer) Irene Searles emailed that the high school’s New Voices for Youth (NV4Y) program — profiled on InMenlo in November — is just short of its campaign goal of $15,000 to continue in 2014.

Donations are accepted online via Indiegogo.

“The start-up grants were used up long ago and the ongoing grants and contributions have gotten smaller. New Voices will not continue at M-A in 2014 unless this campaign succeeds.

“When you support NV4Y, you develop new storytellers and new stories. We don’t know who they are and what their stories will be, but we do know that silencing their voices won’t help.

“As a community of parents and residents, we can all contribute online and aggregate the funds needed to keep NV4Y alive in 2014.”

Goal met! Thanks all.

Besides this successful fund-raising effort, is NV4Y involved in Silicon Valley Gives? As a non-profit, the program qualifies for free tech goodies, support, workshops/coaching to improve social media presence, etc. May 6 is the official “giving” day, so there are still 4 months to prep. More info: http://www.svgives.org/
Also, perhaps NV4Y could apply for the 2014/5 Almanac/Weekly’s Holiday Fund.
Good work, and good luck!
Betty Meissner