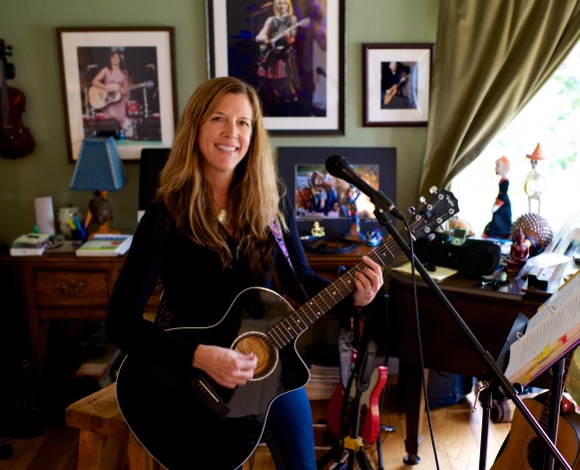 After Typhoon Haiyan hit the Central Philippines last November, Menlo Park resident Laurie Knox found herself driving around and getting depressed. “Then all of a sudden it was out of the news,” she recalls, noting that it’s been identified as one of the strongest storms ever. 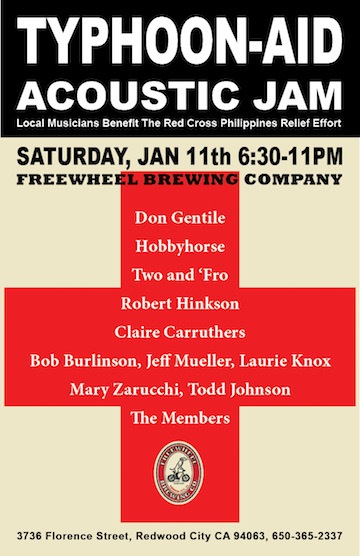 So that the ongoing relief efforts are not forgotten, Laurie has rounded up other talented local musicians for what they’re calling “Typhoon-Aid Acoustic Jam”, a benefit for the Red Cross Philippines Relief Effort that will take place on Saturday, Jan. 11th from 6:30 to 11:00 pm at the Freewheel Brewing Company in Marsh Manor.

“People will get to hear people who in many instances are also their neighbors playing folk, a bit of country and some mellow rock,” she says.

In addition to Laurie, who will be playing with Bob Burlinson and Jeff Mueller, the lineup includes Don Gentile, Hobbyhorse, Two and ‘Fro, Robert Hinkson, Claire Carruthers, Mary Zarucchi & Todd Johnson and The Members.

Music has played an important part in Laurie’s life since she was a child: “I started playing piano when I was five and took up the cello in fourth grade. I was in a coed choir at Stanford and got into a band playing bass my freshman year there. Then it was law school and a career in criminal law. But when my twins entered first grade, I got back into music.

“Motherhood always comes first and working in my family’s business comes second. But I play pretty much every day. It keeps me sane.”

After a five-year period where she took voice lessons, Laurie is now turning her attention to learning the guitar. “I always wanted to play guitar but it was easier to ramp up playing bass. I realized I don’t need to play lead – I can play rhythm guitar!”