Plantation Cafe is go-to spot for VCs, neighborhood regulars – and a bunch of tweeners 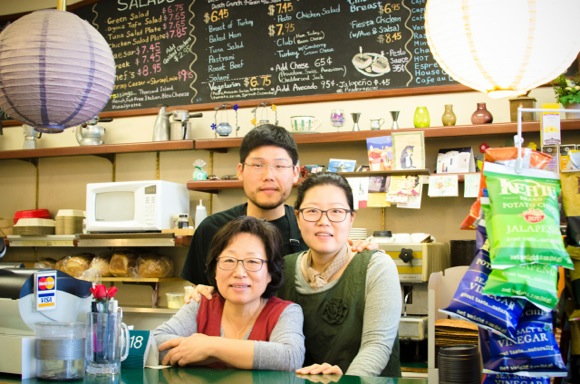 For the last 15 years, the Plantation Cafe on the Alameda in west Menlo Park has been very much a family affair. That goes for the owners as well as their loyal customers, some of whom are lunching out at a young age.

“This was an existing cafe that we took over in 1999,” explained Soo Shin, who runs the cafe along with her mother, Maryann Kim, and brother Ji. “We’d looked around at various places but liked this neighborhood a lot. It felt safe.”

Regarding safety, the Plantation Cafe may be one of the few places in Menlo Park that parents of grade school age children feel comfortable having their kids frequent on their own. This is particularly true when nearby La Entrada School has minimum days; the cafe is often packed with fourth and fifth graders. “The kids give me a heads up when there’s going to be a minimum day,” said Soo smiling. “They tend to favor sandwiches made on Dutch Crunch.”

Soo and her family have seen Plantation customers grow from bike riding to car driving age. “It’s fun watching the kids grow up,” said Soo. “That’s one of the best things about working here. We’ve also met so many interesting people we wouldn’t have met if we didn’t own a local cafe.”

In addition to customer-favorite chicken pesto sandwich or salad, the Plantation Cafe is also known for its changing art exhibits. “One of our steady customers was Bill Cheney, who worked at Sunset magazine,” explained Soo. “He was also an artist and would organize the exhibits here. After he passed away, I kept the tradition going. There are a lot of artists who live around here!”

Currently on display are works by the Menlo Art League. “It’s been a win all around. We get art for our walls and make a little commission. The local artists get to display their work. It’s mostly been paintings — that seems to be what our customers like.”

And at Plantation Cafe, it’s all about the customers, whether they be young or old.