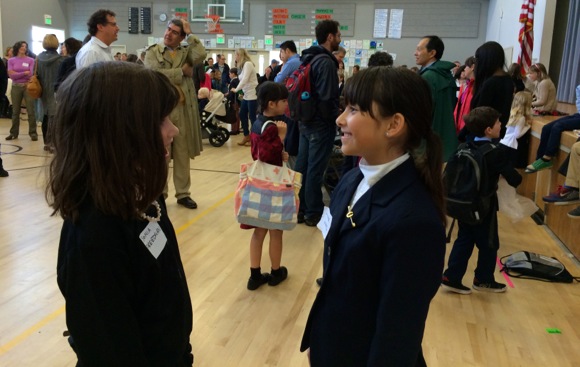 Maurice Ghysels, MPCSD Superintendent commented: “Our special thanks to Sharon Burns, Principal of Encinal School, and Brier Buchalter, Debate Coach, for putting together such a successful event.  I was impressed with the quality of debate, teamwork and sportsmanship demonstrated by our students.

“The Menlo Park City School District’s debate program is tremendously complementary to our work in adopting the Common Core and our writing workshop initiative. This tournament is a great example of our core values of leadership and innovation.”

The parliamentary-style debate tournament involved teams of two children who debated on behalf of the “government” or the “opposition” for several rounds.  Each round was assigned a debate topic and children received 15 minutes to prepare their presentations to a panel of three to five judges.

These kids were incredibly poised and gracious in both victory and defeat. Truly impressive citizens!