The aroma of chemicals emanates from the La Entrada classroom occupied by Janet Gregori. It’s that distinctive smell of developer, stop bath and fixer known to people who are partial to film photography, which she teaches to her middle school students in spite of the digital camera revolution.

“The kids are so fired up to be in here,” she say, standing in the door of the school’s dark room. “They know when it’s their darkroom day. The room can only hold five kids at a time, so they take turns throughout the week.”

Janet has been at La Entrada for 19 years — and teaching school for 23. She was an architecture major at San Francisco State who put herself through college doing before and after school daycare. When she graduated and stopped the daycare job, she found she missed the kids, so after a stint as a social worker, she went into teaching.

“I love teaching and I love helping people and I love art,” she says. “It all comes together for me as an art teacher.” 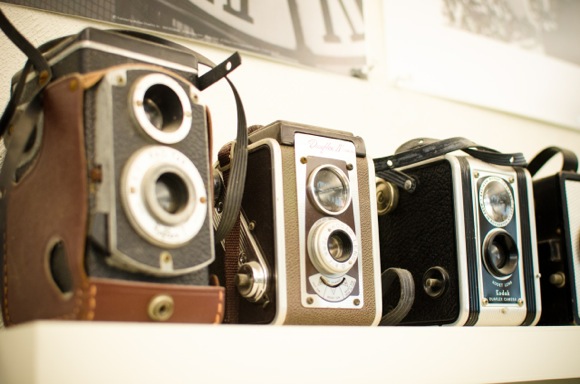 There was a darkroom at La Entrada years ago, and the loaner cameras (above) that line the walls attest to that era. When the school was being remodeled, the idea of building a new darkroom surfaced. To get up to speed on the craft of film photography, Janet took some night classes and spent time with a teacher at Hillview School, which had a darkroom.

“When we first started the darkroom, everyone had point and shoot cameras, but the technology didn’t exist for digital,” she says. “Now I teach digital photography as well, but I think there is a certain art form with dark room work that is still very useful. Film can be manipulated in the dark room, and the negatives are archival. There is something amazing about putting paper into developer and having it come to life before your eyes.”

Even before the kids get into the darkroom, Janet believes valuable lessons are learned when you take photographs with a roll of film with just 24 exposures. “A student has to think,” she says. “There’s no easy erase. Each shot has to be planned out.

“I tell the students at the beginning of the semester that they will start to see the world in a different way. Shooting with a film camera helps them become more aware of their surroundings and teaches them that there is beauty in everything.”

So awesome to hear a story about someone keeping film alive.

Awesome! Ms. Gregori was one of my favorite teachers when I attended La Entrada about 15 years ago. I’m happy to see she’s still teaching students there invaluable lifelong lessons. They’re lucky to have her.

It is wonderful to have Janet’s talent and dedication showcased. The enthusiasm of her students shines.

Mhmmmm…this is going to help students get into Cal down the road…how?

Maybe they can get jobs at the ole photgraphy factory!

For pity’s sake, what a waste of taxpayer dollars. None of them will be the next Ansel Adams. I already pay out the nose in property taxes, and this is what it goes to?