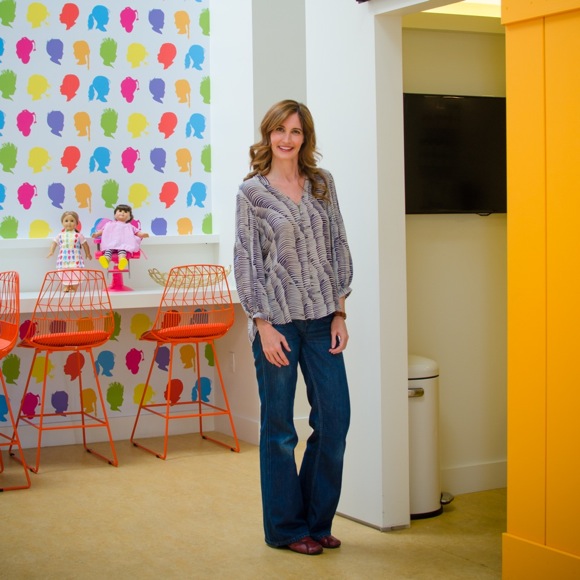 The holidays turned itchy some years ago, according to Melissa Black, owner of Honeycombers, a gleamingly clean and charmingly decorated salon on El Camino in Menlo Park dedicated to eradicating lice.

“All four of my daughters got lice on Christmas Eve,” she explains. “One was itching for several weeks — her whole class had been infected. I tried one of the home remedies and read a lot of information on the web, but had no idea what I was doing.

“I finally found a lice salon but thought I could do better. Honeycombers is the result.”

Another impetus for creating her own business was the sudden death at age 37 of her husband, whom she had met while both were at Stanford Business School. “I was looking for something to throw myself into,” she says. “Having your life turned upside down, you are willing to take risks.

Her plan is for the Menlo Park Honeycomber salon to be the flagship store — and the first of many more to come, initially at a number of other California locations.  “We’ve worked hard on designing the interior and selecting products,” she says. “Our goal is to calm the parents and keep the kids entertained while they are here. Few people understand how difficult it is to detect lice, so part of our job is education.

“I opened the first Honeycombers in Menlo Park because, having lived here, I understand the parents here. They demand service, quality and someone who knows what they’re doing.

“I also felt that the community here is one that would embrace this concept — and me. I feel safe and supported here. And I know I can count on people to be honest with me. Feedback is important to an entrepreneur.”

The staff at Honeycombers will also make house calls, not only to comb the hair for lice but also to clean/discard bedding and garments that the child came in contact with.

One point Melissa wanted to make clear is that she and her team are here to serve the whole community, including those who find her salon’s services too expensive for their budget. “We’ll teach a mom who wants to do it herself  how to do it,” she says. “You can do it. You just need to put in the time.”