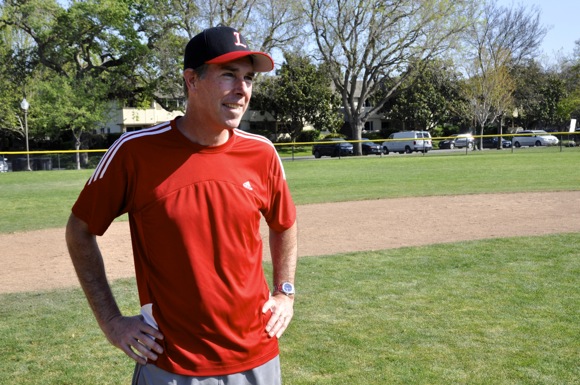 Menlo-Atherton Little League coach Bob Baxter knows about perseverance. It’s that — and having the kids focus on the last thing they did well — that he tries to foster. For his efforts, the third-year coach and former minor league pitcher received the Positive Coaching Alliance’s Double-Goal Coach award, a nationwide honor bestowed on 25 coaches who “strive to win while pursuing the more important goal of teaching life lessons through sport.”

Bob played baseball at Harvard, where he met his wife, Robbie, a Menlo Park native and graduate of Menlo-Atherton High School. He was drafted by the New York Yankees after his junior year, but stayed in school and was eventually a low-round draft pick of the Montreal Expos, an organization he was with for most of his professional career.

“Seven and a half years is longer than most stay in the minors,” he says. “But when you sign a pro contract, it’s for seven years. They don’t know how quickly you’ll progress. Most players get hurt, released, or make it to the big leagues. I sort of progressed at a speed that gave me hope.

“When the Expos released me in 1997, it was not the news I wanted to hear. They offered me a position as a short season pitching coach, but I was still in the mode of being a player.”

A lefty, Bob relied on sinkers and sliders that rarely cracked 90 mph. Never being a super star, he developed other skills, like being a good person in the clubhouse and getting along with players and coaches.

More than his professional managers, he draws on what he learned from the coaches he had as a Little Leaguer. “I had coaches who were tough on people and tough on me, but the ones I remember are the ones that took the team out for ice cream after practice,” he recalls. “It wasn’t just about winning.”

“This is my first year coaching in the Majors — the team is sponsored by Lutticken’s. Menlo Park can be a very intense place, but our League values positive reinforcement — the mix of winning and reinforcing the positive messages of noticing what you’re doing better and being a good teammate.”

As for if he’ll ever coach professionally, Bob, a banker now by profession, replies: “Who knows!”

This is a great story. Bob you are a parents dream of teaching values over winning. Winning comes to good players who value what they do and work as a team. Great news for you and Robbie. Who knows??