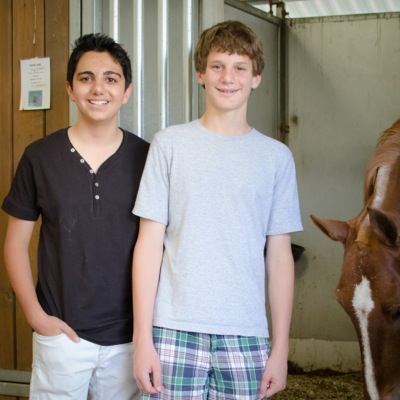 Sacred Heart Prep freshmen Milan Kordestani and Ethan Fieber don’t have to go far to pursue their after school sport. They cross Park Lane and are at the Menlo Circus Club where their two horses are stabled as part of trainer Jennifer Dixon’s barn.

Both ride American Saddlebreds and both will be competing at the United Professional Horseman’s Association Horse Show at the Horse Park in Woodside May 8-11. But they won’t be competing against each other; Ethan shows in juvenile five gated and Milan in equitation.

By his account, Ethan decided he wanted to get involved with horses when he was in second grade at La Entrada. “I was walking home from the bus with my mom, and, out of the blue, I told her I wanted to get into horseback riding. She searched around for where I could take lessons and found Jennifer, who I started training with when I was six.” 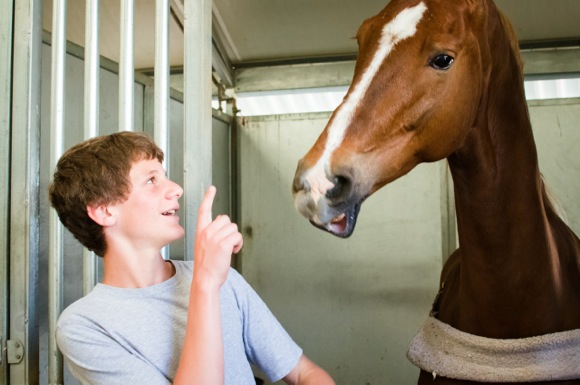 His current horse is River Card, a seven-year-old gelding nicknamed Doofus. “I got him when he was just four, and he tended to do stupid things sometimes,” explains Ethan. “So his barn name became Doofus.”

Ethan says he tried other sports like basketball, soccer and baseball but believes riding provides a much more personal experience. “It’s all about your skill and how you connect with the horse.” (Note: Ethan does play on Sacred Heart Prep’s tennis team.)

Milan’s journey to the horse world began with a fall. “My family used to go to this dude ranch in Montana where we’d go fishing and kayaking, and do some trail riding,” he recalls. “One time my horse took off, and I fell off. My Dad is  a cautions type and took me to the hospital even though I wasn’t hurt. The next day, I told him I wanted to go riding again, but he said, ‘Not until you take some lessons.'” 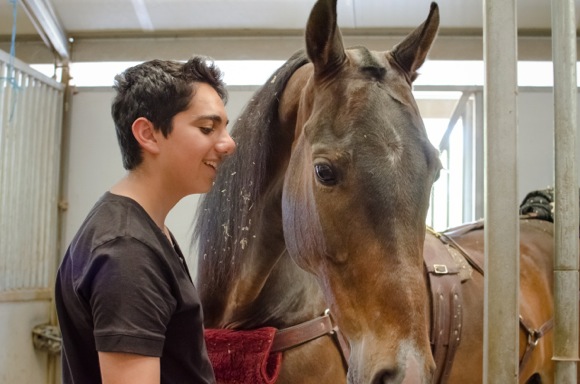 Milan’s training has paid off. He’ll not only be riding his horse, Mocha’s Mudslide aka Muddy, at this weekend’s competition, he’s also headed to Kansas City in the Fall for the UPHA Challenge Cup, established in 1972 to encourage competition for saddle seat equitation riders throughout the nation. A Junior Challenge Cup Championship, which Milan will compete in, was added in 1979.

As for the upcoming show, Milan says, “I’ve had two second places, so my goal is to place first.”

Equestrians come from all of the western states to participate in this weekend’s competition at the Horse Park, which features American Saddlebred Horses, Morgans and Hackney Ponies. It is free to spectators, and the action takes place from 10:00 am to 3:00 pm. Further information about classes and schedule is available online.