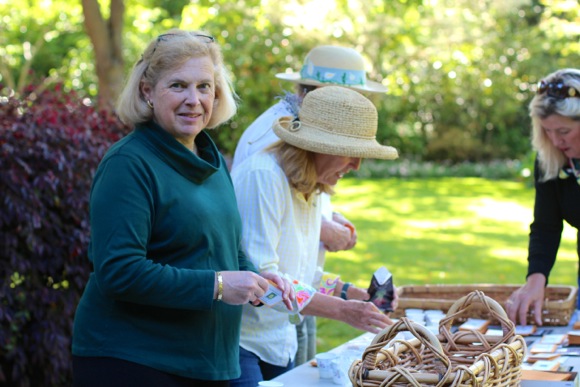 Leave it to gardening enthusiast Barbara Tuffli. Introduced to a concept just months ago (August to be exact), she’s already made it a new feature of this year’s Woodside-Atherton Garden Club’s native plant sale scheduled for Saturday, May 10, at the Woodside Library.

We’ve visited with Barbara in the past, touring first her camellia garden, returning when her roses were in bloom. Her new passion is the creation of a seed library. Those attending the native plant sale will be able to  browse through a chest filled with a collection of local seeds and “borrow” some to plant, grow and then harvest, “depositing” the seeds back in the library. 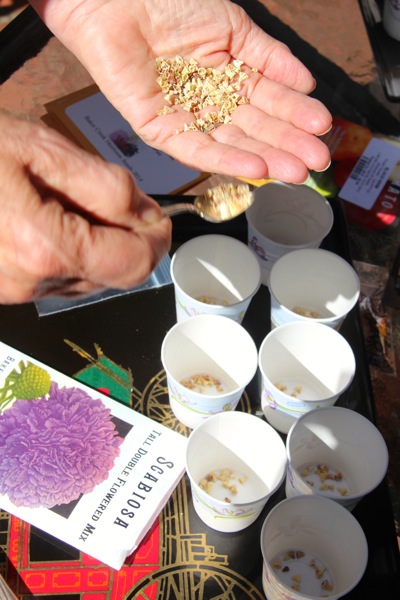 “I’m the seed chair coordinator for the Garden Club of America, but it wasn’t until a friend turned 90 last August that I visited a seed library,” Barbara explained in the backyard of her Atherton home where nine other garden club members were busily putting seeds into packets. “I promised her a horticulture adventure for her birthday, and we visited two seed libraries, both in  Santa Cruz.

“The first was the Live Oak Branch of the Santa Cruz Library. It had a chest of drawers with dividers filled with seeds. There was a sign-out box where people could note what seeds they were taking. There was another box to return your seeds after you’d grown the plant. It’s a simple concept.”

According to Barbara, the 200 seed libraries in the county help preserve genetic diversity. She noted that there were 7,200 varieties of apples in the 1800s. Today there are just 300.

“It’s important to have open pollination and genetic diversity,” she said. “Seed libraries serve the community.”

The Woodside Library seed library will be the second in the country library system. The East Palo Alto Library was the first to establish one. 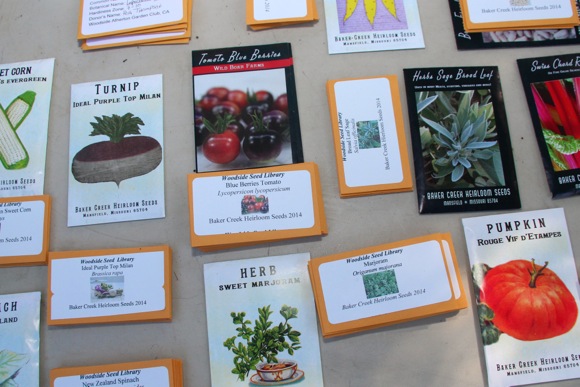 “This is a learning experience,” said Barbara. “We are hoping to partner with elementary schools in the future and develop a template so that other garden clubs can start seed libraries.

“To me, it’s absolutely fascinating and fundamentally important. We owe it to our community and to future generations.”

The Woodside Atherton Garden Club will be selling hundreds of  plants at the Woodside Library on May 10, 2014, from 10:00 am to 2:00 pm. The fundraising event takes place every other year, giving members time to propagate and grow many unusual specimens. This year the focus is on native plants such as salvia, ceanothus and cactus varieties, but there will also be a large selection of vegetables and roses.

The library is located at 3140 Woodside Road in Woodside.