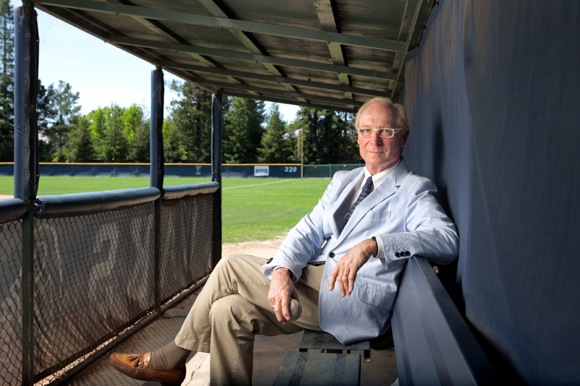 Herschel Cobb recalls the moment at the Sharon Park duck pond when his then-preschool-age daughter turned to him with a request: “Tell me stories about when you were a little boy.”

“There was nothing suitable for her ears,” he says. “But I did have memories of wonderful times with my grandfather [Ty Cobb] in Atherton and Lake Tahoe. My wife happened to walk by and suggested that I make some notes before I forget the stories altogether.”

Both his childhood with abusive parents and his times with “Granddaddy” are chronicled in the book Heart of a Tiger: Growing Up with My Grandfather, Ty Cobb

. Herschel will be talking about the book and answering questions on May 27 from 1:30 to 3:30 pm at Little House Activity Center in Menlo Park, an event that is open to the public.

Hershel, an attorney and investment advisor by trade who’s been a Menlo Park resident since 1991, admits that writing about his childhood was painful. “The first time through it was just ‘let’s get it out,'” he says. “I used to write in the late afternoons and early evening. A glass of wine would help wash it all away. The healing part came in the process of the many edits and re-edits.”

Writing the memoir has resulted in some positive byproducts. “One is the number of men who’ve come forward and told me, ‘I want to tell you about my childhood.’ Their stories are similar to mine. The sharing has opened up new friendships and deepened existing friendships.”

The other plus, according to Hershel, is the number of people who have stories of their own about Ty Cobb and the many staunch admirers the Hall of Fame player continues to have. (For non-baseball fans, Cobb, who played all but one year of his long career with the Detroit Tigers, is considered one of the greatest to play the game. Details on Wikipedia.)

“Many people come to my talks having already read the book. They tell me ‘I’m really interested in your grandfather. I admire his intelligence and determination.’ What I hear from them adds another perspective.

“Then there are the first-hand stories. An older man came up to me and said, ‘I want to tell you why I love Ty Cobb. My father and I were driving by his house on Spencer Lane and he told me to get out and go get Ty Cobb’s autograph.

“‘ I went to the front door and asked, “Are you Mr Cobb?” I pushed the paper at him and said I want your autograph.

“‘He said, come with me. He took me into his office and reached into a bin of baseballs and took out a pen from his pocket, writing Ty Cobb and the date, reminding me not to smudge the ink. I went back to the car and showed my father my prize.'”

That two of the best players of all time — the other being Willie Mays, who many consider the greatest of all — both ended up in the small town of Atherton, seemed a bit ironic to us, and we asked Herschel if the two ever met, particularly as they lived about a mile apart as the crow flies.

“It’s unlikely. My grandfather was in declining health in the years after the Giants moved to San Francisco. But I know he had a great admiration for Mays. I remember him telling me, “He’s the only player I would go see play.'”

I love reading about Ty Cobb. He was a true player and a great person I’d like to believe. I will be reading as many books about Mr. Cobb as soon as possible. What a smart and generous man. Love the great Ty Cobb.