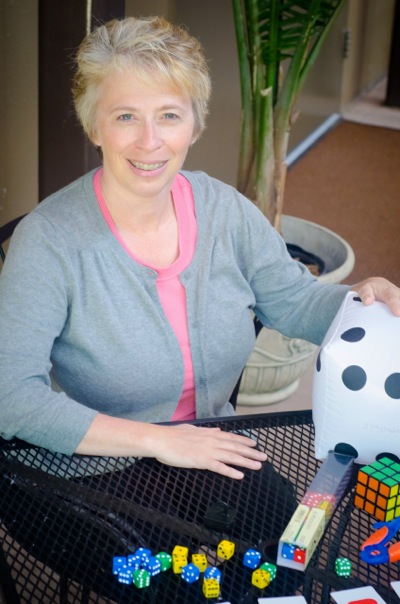 Paula Hamilton is hoping that her new math camp this summer — Mathitude — will get campers as high on math as she jumps on a trampoline.

Ok, she didn’t exactly put it that way. But we’re presuming her enthusiasm for all things mathematics might come as part of the competitive spirit she displayed when she won the Hawaiian state trampoline championship in her age group a few years back. While no longer competing, the west Menlo Park resident admitted that she does regularly make the trip to the City where there is a facility that has performance level trampolines.

Paula spent her early career working in risk management at banks, pausing in 2010 “to figure out what I wanted to do next.” She started Calling All Musicians and worked with her son – now in middle school – and other kids tutoring math, something she’d done during her undergraduate and  graduate college years.

“Since high school and throughout my corporate career, people would suggest that I should be a teacher.”

The camp is new this summer and has three one-week sessions for students entering grades 2 through 8, with participants divided into age groups. The subject matter is presented in a fun, entertaining way with kids involved in activities such as treasure hunting and playing math logic games. More details and sign ups are available online.

“Mathitude is all about the attitude,” she says. “The kids’ engagement is the absolutely most important thing. This is not a pencil and paper camp. The focus is changing the ways kids think about math.”