Residents at Atherton Healthcare were treated on a recent morning to an old-fashioned variety show, showcasing the talents of local adults and youngsters. The assembled musicians, who performed everything from classical pieces to a rousing rendition of Singing in the Rain (pictured top), are the brainchild of Menlo Park resident Paula Hamilton, who’s named the group Calling All Musicians.

Explains Paula: “I came up with the idea for the group when trying to figure out how to help the two tails of our population:  Young people who can benefit greatly from community service as well as interaction with seniors, and older people living in senior facilities who may not get much outside socialization and may be more in touch with music than with regular conversation.” 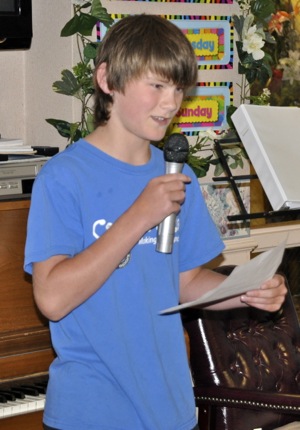 The recent performance was emceed by a new member of the group, Max (pictured) who doesn’t play an instrument but wanted to help out. Paula has used her school-network ties to recruit as many young musicians as she can to perform solos and duets. Then, she uses adult musicians and sing-alongs to fill out each musical program.

She cites two inspirations for forming Calling All Musicians. “One is my 93-year-old grandmother who’s been in a senior facility in Ohio for the past five years,” she says. “When my family and my brother’s family went to visit her, we were surprised to find that she couldn’t hold a simple conversation, didn’t know her daughter’s name, and thought that her son-in-law was her second husband.

“We weren’t sure what to do with her as we couldn’t talk about anything. My brother and I decided to sit at the piano and started playing hymns and Christmas carols. As we started singing, so did our grandmother.  She sang every word of every song we played.

“Since I’m unable to spend time regularly with my grandmother, I thought it would be a good idea to start becoming engaged with other people’s grandparents.”

A six-week workshop offered by Project Cornerstone at La Entrada School served as another inspiration for forming the traveling group of musicians. “One area the workshop focused on was community service,” she said. “That’s believed to be a ‘super asset’ for children.  The more assets (or super assets) a child has, the more likely they are to avoid at-risk behaviors in high school (low grades, dropping out, problems with drugs, etc.).  In addition, music (or other artistic outlets) is another asset that encourages strong, positive behaviors.  So, when I thought of my grandmother’s needs and then thought about additional assets that I could help my son develop, I came up with the idea for our musical service organization.”

Local adults and youngsters who are interested in joining Paula’s group for one or more performance should contact her via email — paulajhchang@yahoo.com — or by phone, 650-561-4127.