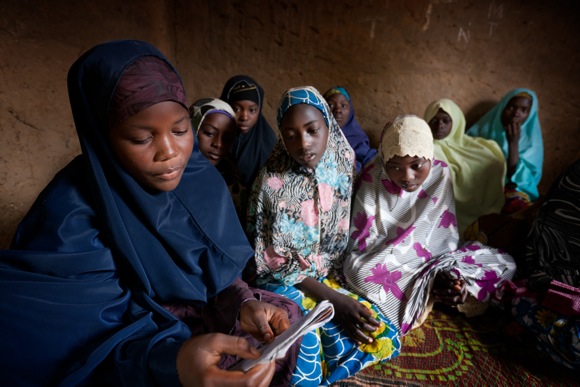 Menlo Park resident and poet Lynore Banchoff emailed InMenlo: “For the past decade, my friend in Menlo Park and professional photographer Mark Tuschman, has been on a mission to document the lack of autonomy that millions of women in developing countries have over their own lives and bodies.

“Through his photography, he brings these women and their stories to the forefront of global consciousness. No other photo-documentary has portrayed the full scope of this human drama as it unfolds around the world, capturing women’s unshakeable dignity and the relentless efforts to transform despair into hope and triumph.

“[You can] help publish Faces of Courage: Intimate Portraits of Women on the Edge and become part of the growing movement of our time to take a stand for women’s rights. These photographs are exceptional in color and emotional/story telling quality. They were taken by him in Africa, Asia, India and the Middle East.”

Funds are being raised via a Kickstarter campaign. In addition, Mark will be appearing at Menlo Hardwoods (846 Santa Cruz Ave.) from 5:00 to 8:30 pm on Friday, July 18. His photographs will be on display, and there will be time for Q&A. Refreshments will be served. 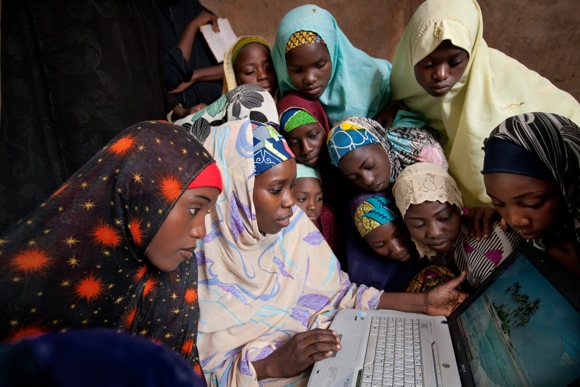 Mark provided commentary about the two photos, taken in Nigeria, that accompany this post:

“It was raining, and as we waited outside a small mud structure, a few women came to sweep out the water that had accumulated on the floor and then proceeded to lay down a dry carpet. About 15 girls appeared, and they all sat down in a big circle in the room and took turns reading from a single, soft covered book [top photo].

“When everyone had had a turn reading, the mentor brought out a laptop computer and all the girls surrounded her, jostling with each other to be able to get a view of the computer screen. The mentor showed an image on the screen of a building in Europe (or the U.S.), and their hunger to get a glimpse of the outside world was palpable.

“I have to admit that from my Western eyes, I felt very sad that these girls were unlikely to ever have a chance to achieve their potential, to become doctors, nurses, lawyers, scientists, artists; their choice was limited to getting married and to having frequent pregnancies.

“I think it is wonderful that they learned how to read and write, but I could sense from photographing them that there was so much more they could achieve.

“Nigeria has the wealth to educate these young girls and it is very unfortunate that the government can’t provide a full education that would give them the choice and the opportunity to attend a university.”

“These girls’ situation is not unique; unfortunately, it is all too common. Their tragic loss of potential belongs not only to these young students who have such a desire to learn, but also to the nation of Nigeria and to the wider world.”