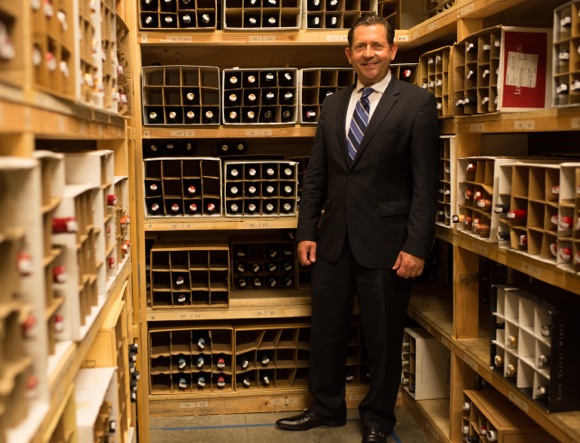 Madera restaurant’s Director of Wine Paul Mekis was not always a “wine guy”. But he did have early influencers.

Raised in Santa Cruz, his father and grandfather made wine. He also remembers a trip to the Napa Valley when he was in his early 20s with his Missouri grandparents.

“I’d done some research before and took a lot of notes,” he recalled. “That got me started collecting wine, which I kept in a closet. At least the climate was cool where I lived.”

Those influences did not immediately launch his career as sommelier. Instead, he owned a sunglass store in San Francisco from 1979 to 1986. In the City, he met Nunzio Alioto, owner of Alioto’s #8 at Fisherman’s Wharf, who gave him his start.  He honed his tasting and service skills under the tutelage of Master Sommelier Ronn Wiegand.

“There were no sommelier schools here at the time,” Paul said. “I did my own study and passed the Advance Sommelier test in 2005.” In addition to his duties at Madera, he is director of wine for Rosewood Hotels & Resorts worldwide.

The wine list at Madera features close to 2,000 wines (1,933 to be exact at the time of our interview), which Paul built from scratch when the restaurant opened. “The best part of the job is tasting a broad selection of wines,” he said, adding that he often tastes 30 or 40 wines a day.

Asked the classic desert island question of what wines he’d want with him if stranded, Paul replied: “The white would be German Riesling, say a 1971 Mosel. For a red, I’d take a 1982 Bordeaux from Chateaux Lynch Bages. For an American Cabernet, a 1990 Ridge Monte Bello. My sparkling choice — a 1997 Salon Blanc de Blancs, Clos de Mesnil.”

Those lofty selections aside, it’s Paul’s responsibility to offer wines in various price ranges. “It’s almost like being a chef,” he said. “My name’s behind the list.”

We ended our visit with a tour of Madera’s white wine cellar (very chilly!) and then the red cellar (pictured), where wines were stacked not in fancy racks but rather cardboard boxes.

“Yes, that surprises people,” he said. “But over the years, I’ve found the boxes hold the wine more snugly and provide more stability if there’s an earthquake.”