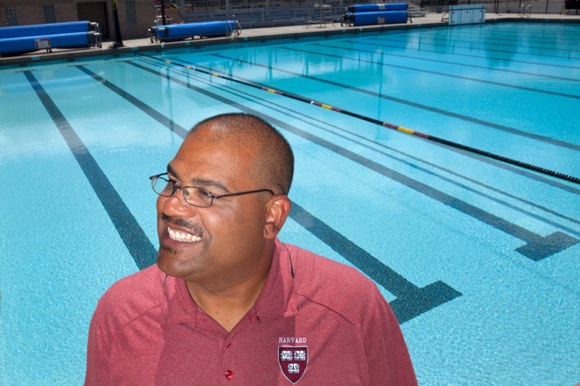 A tall and athletic 8th grader at Nativity School, Ted Minnis had caught the attention of legendary Menlo-Atherton High School football coach Ben Parks.  But on the way to the football field, Ted took a dip in the water.

“My friend Ken’s dad, Jim MacKenzie, had played water polo at M-A,” recalls Ted. “Ken was going to follow in his dad’s footsteps. We were at his grandparents’ pool one day, and Jim taught me the egg beater kick. That would serve me well in the game, as I was goalie.”

As for not playing football: “Let’s just say when I decided to play water polo at M-A, Coach Parks was not happy. [Football and water polo are both Fall sports.]

Ted not only played at M-A, he returned to the school at age 21 to coach boys’ water polo, a position he held for the next 11 years, while holding down a day job and raising his son. He left in 1999 to coach water polo and other sports at Castilleja School in Palo Alto, where he also held positions in athletic administration.

We met Ted at M-A’s pool, which has been rebuilt since his tenure there. He was in California recruiting  male and female high school water polo players for his current employer, Harvard University, where he’s coached for the past four years.  “I get to do what I love all day, every day” is how he sums up his coaching duties.

Neither water polo nor football were Ted’s first choice of sports. “I wanted to be a basketball player and go to the Olympics and coach at the college level” he says. “But I realized I wasn’t good enough. What’s a bit ironic is that you can take a lot of basketball into the water.”

He cites current Stanford female water polo coach JT Tanner, who also grew up in Menlo Park, as his most significant mentor. “In my mind he’s one of the best coaches in the world,” Ted says. “I am where I am today because of JT. He took my coaching to another level.

“As an example, one day he filmed me at practice. I was yelling and screaming per usual. JT showed me the film and said, ‘This is what I’m going to show to your mom.’ That sunk in, and from that moment on, my demeanor on the pool deck is motivated by behaving in a way my mom would be proud of.”

Ted has yet to recruit any M-A players to play at Harvard. But he’s back in his hometown staying at the family home, so who knows if this will be the magic year.