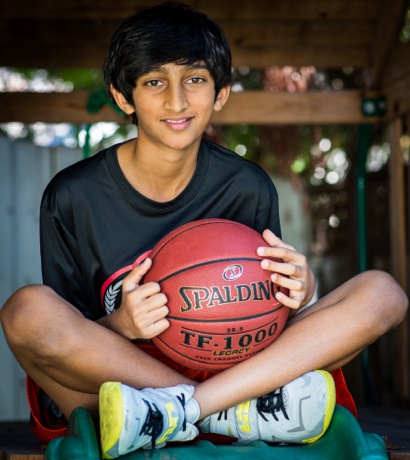 When Menlo Park resident Shay Patel starts back to school today, he’s hoping that it will be an occasion to celebrate.

About a month ago, the 5th grader at Phillips Brooks started a crowdfunding campaign to bring athletic equipment to 60 low-income kids involved in after school basketball at the Boys & Girls Club of the Peninsula.

Shay told us he likes a lot of sports but basketball is his favorite. He plays guard for Team Esface, a local club team. “I’d had another experience where I went to residential hotels to deliver Thanksgiving meals,” he said. “But I wanted to do something that was more relevant to what I loved. So that’s why I came up with raising money for after school basketball.”

A $100 donation buys one gear pack which contains a basketball, basketball shoes, a jersey, basketball socks and a water bottle. Donors can also choose to buy a piece of equipment rather than the entire pack. You can make your selection and donate online.

When the fundraising campaign is over, Shay plans to enlist the help of his friends to put the packs together and deliver them to the Boys & Girls Club.

If Shay’s campaign exceeds its goal of $6,000, he told us he’ll start another project. “I think this is only the beginning,” he said.

So proud of you Shay for taking this project on. Good luck with this one and many more that you are going to do.