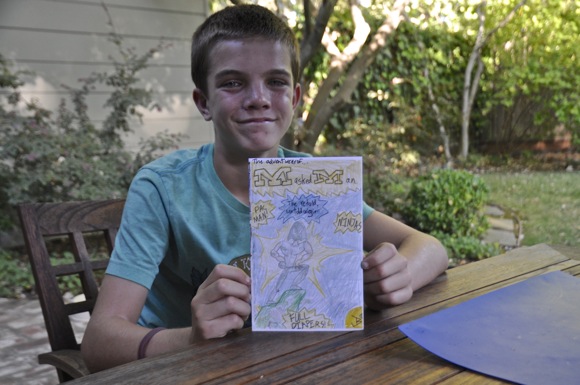 Masked Man was birthed on a Saturday, Jack recalls, “when I didn’t have much else to do. So I sat down and started drawing and out of it came my own Super Hero.”

According to Jack, the cartoon character draws his super powers from a mask he found discarded in the trash. The super powers include steel claws and grip, a web to capture things, and super strength. Masked Man’s mission is to find and capture bad guys who’ve eluded the police.

To date, Jack has completed one comic, which he had duplicated at Kinko’s. He’s been selling it from a stand in front of his west Menlo house. With support from his parents, he hopes to get a website up that will showcase future editions and allow people to make online purchases.

Jack, who plays water polo when he’s not at school or working on his super hero character, says his favorite comic book character is Asterix. “I like graphic novels because they are funny, are good stories — about Gauls, Goths and Cleopatra — and are historical.”

Adds father Dave Barry: “We’ve been working on his business model. We want to use Masked Man as a vehicle for Jack to learn about business and finance.”

Man, I want to buy one