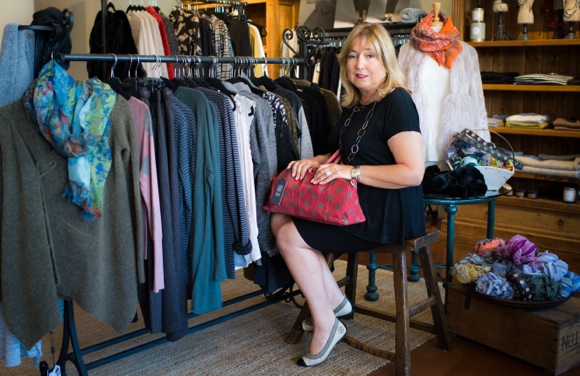 It was amber, which she imported from her native Poland, that led Graciana Boutique owner Diana Ferrari to the world of fashion and jewelry.

“I was living on the East Coast when I came to visit my brother in San Francisco,” she recalls. “The weather was gorgeous in December and I moved West. For many years, I was in the wholesale jewelry business at the Gift Center.” 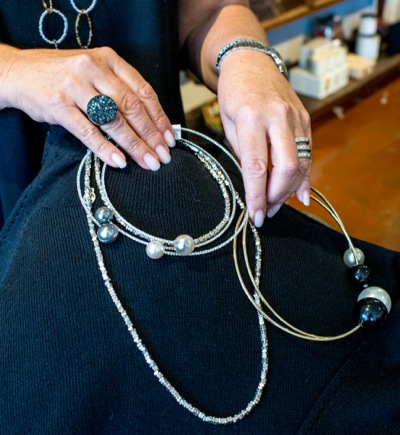 She opened Graciana on Crane St. in downtown Menlo Park nine years ago, and three years ago moved to its current location on Santa Cruz Avenue. She is her own buyer and features European as well as American collections. Among other jewelry, pieces featuring amber remain for sale.

Diana believes that Graiciana has endured while other downtown Menlo Park boutiques have closed thanks to her long-standing customers and clothes that are stylish but wearable. “I do try to strike up a conversation with everyone who walks in the door,” said the very personable Diana. “And then let them look around at their leisure.”

In her nine years in Menlo Park, she’s seen a continuing shift away from dressy to more casual clothes. But black continues to be not only her favorite, but many of her customers’ favorite. “I also like orange,” she said, “but black just makes you feel good.”

As part of the boutique’s occasional events, stylist Loren Pearlman Ward will be giving complimentary style consultations on Thursday, Oct. 23 from 10:00 am to 6:00 pm. Those interested are asked to sign up in advance online.