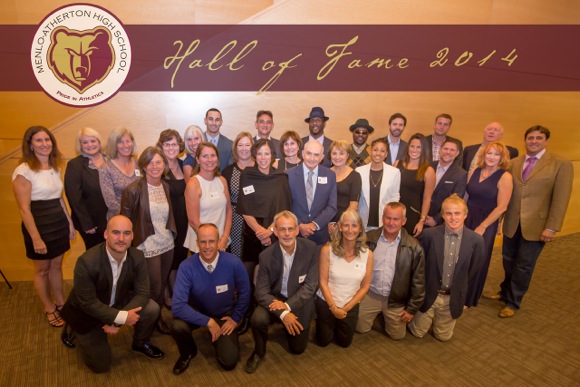 The inception of the Hall of Fame took place in the early 1990s. In the midst of his tenure as principal, Dave Theis approached Coach Plato Yanicks to inquire about the possibility of establishing a Sports Hall of Fame at Menlo-Atherton. The first induction ceremony took place in 1994. There were additional ceremonies through the 2005 school year, but the Hall added no more recipients until this year.

There are now over 300 athletes, teams and coaches enshrined, including many First Team All-Americans and two World Record holders (Greg Buckingham,’63 and Dick Roth,’65). As a result of the 10-year hiatus, more honorees were recognized than in previous years. This year’s selections include 5 athletes, 3 Community Service recipients, 2 teams and 1 coach.

Planning for an event of this complexity and magnitude takes many volunteers and M-A is blessed with amazingly capable individuals. The effort was spearheaded by the current dynamic duo of Steven Kryger and Paul Snow, the Co-Athletic Directors.

The ceremony commenced with a “Happy Hour” at 5:00 pm, followed by a sumptuous dinner, dessert (beautifully decorated cakes with an M-A theme, of course) and ended with the induction ceremony where the recipients were glorified by speakers and then presented with inscribed plaques and commemorative medallions.

For those fortunate enough to attend, the ceremony was a grand event, providing excellent recognition for many outstanding athletes. The current Hall of Fame selection committee has decided that this event will be bi-annual, so the community should be looking forward to the next chapter of the M-A Athletic Hall of Fame in 2016. Until then, there are many wonderful memories as a result of the ceremony at the Elks Club in 2014. 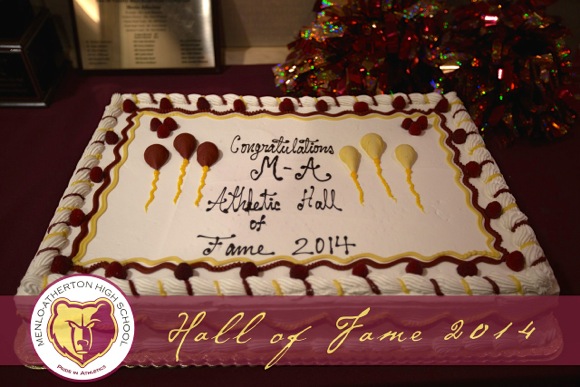 The following were recognized for their roles in furthering the prowess M-A enjoys with their sports programs:

Greg Camarillo (Class of 2000) Football and Basketball: Greg was one of the finest multi-sport athletes to ever attend M-A. He excelled in football and basketball. He was an All-County selection in football and All-League in basketball. Greg was known for his competitive play, fine hands, sharp routes and encyclopedic knowledge of the game. After M-A, Greg played wide receiver and special teams at Stanford before embarking on a pro career that saw playing time in San Diego, Miami and Minnesota.

Kelly Eaton (2006) Water Polo and Swimming: Kelly was a four-year selection as MVP and 1st team All-League in Water Polo. She was also PAL and CCS Player of the Year. In swimming, Kelly qualified in all 8 events for CCS and did this all 4 years while attending M-A. She is certainly one of the most talented 2 sport athletes in school history. Kelly went on to play for Stanford, coached by M-A grad, John Tanner (’78).

Erica Hayes (2008) Basketball: Erica is easily one of the most talented athletes to ever attend Menlo-Atherton. She excelled in basketball but was a multiple sport standout. She took All-League honors for three years running, was PAL MVP in her senior year and the M-A MVP for three straight years. She is currently playing professional basketball in Hagen, Germany.

Jeremy Mineau (2004) Cross Country, Track: Adding to the already impressive track performers, Jeremy was an elite and highly competitive athlete. He set the track record at Toro Park in Salinas, established the 3200 meter record at M-A and was the top CCS Runner of the Year for 2 consecutive years, making him one of the most recognized runners in section history.

Brent Vartan (1994) Football: Sometimes with a squad as large as the football team, it is difficult to single out one athlete, but Brent was so superior that his athletic promise was immediately realized. Not content to be merely a 1-sport star, Brent was also the striker on the CCS championship soccer team and the MVP of the track team for all 4 of his years at M-A. There were also individuals who greatly contributed to the success of the M-A sports program.

1978 Girls Swim Team: This team was absolutely loaded with talent. Coached by Inez Nagai, who has already been installed in the Hall, the team was the first girls team to claim the CCS crown. This is also one of the M-A sports teams to have enjoyed an undefeated dual meet season.

1989 Boys Basketball Team: In one of the most memorable accomplishments in the history of M-A athletics, the 1989 basketball team won the California State Championship. This was a team that simply dominated other teams of lesser abilities, wins averaging over 25 points. The team, coached by Jeff Klenow, finished the season with an incredible 32-4 record. For those fortunate enough to attend, the ceremony was a grand event, providing excellent recognition for many outstanding athletes.

These four were inducted in the Community Service category:

Connie and Owen Hawkins (1989-’93): Connie and Owen were largely responsible for establishing the Athletic Booster Club in 1989. Funds raised by the Club have been supporting M-A teams for decades.

Susan Mohr(2003-Present): Susan became co-chair of the Boosters in 2004. Her contributions to the M-A athletic program include the first Big Bear Run (2005), which is still the biggest fundraiser for M-A sports teams.

Kitty Moore(1969-2012): One of the longest serving of all community volunteers, Kitty became involved in 1969 and stayed on in many supporting roles for over three decades providing snacks, uniforms and making sure that the referees were properly compensated.

Plato Yanicks (1965-’94) Coach, Cross Country and Track: There are six coaches already in the Hall of Fame. Plato Yanicks is the seventh. He began his career at Menlo-Atherton in 1965, coaching Cross Country and Track. He retired in 1994 as one of the most successful and respected track coaches in Northern California. He was responsible for founding the Cross Country program and instrumental in creating the CIF State Meet. Plato’s teams won 20 Varsity Championships. His teams posted over 300 wins and took second place at the CCS meet on 3 separate occasions. During his tenure, Plato coached 105 league and 14 individual CCS champions.

He also had the pleasure of mentoring several All-Americans. Plato was largely responsible, with Pam Wimberly, for the creation of the Menlo-Atherton Athletic Hall of Fame and was inducted into the San Mateo County Sports Hall of Fame in 2004.

We had a ball all the stars where there my be ill get my time to shine for my records for my school.

Congratulations to all of the inductees! You are a credit to Menlo-Atherton High School, your families, and your community. A special greeting and high praise for Hall of Fame Coach Plato Yanicks, who made so many wonderful things happen. GO BEARS!!!!

P.S. When will M-A’s superb Coach James Williams be inducted??