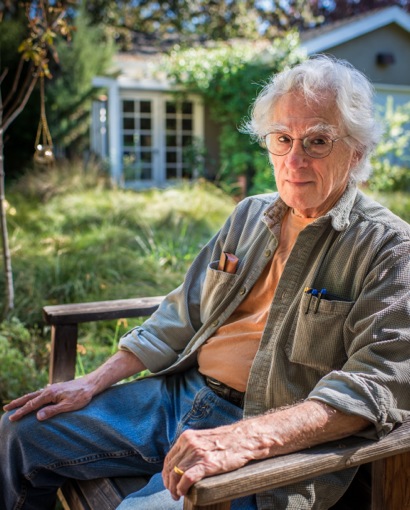 J. David Cummings, known as David, is quick to assure his visitors: “I’m all ‘right’ now!” It was his succinct summation of his journey from theoretical physicist to technical writer to award-winning poet, a decidedly right brain activity after years of thinking left.

“I actually wrote my first poem in high school,” he explains. “But then I got into science and mathematics. But the desire to write poetry remained.”

He left his job at Lawrence Livermore Lab in the 70s, not wanting to do defense work any longer. By the middle of the 80s, he was writing regularly, a practice he continues to this day.

In 2013, he was honored with the Richard Synder Publication Prize for his manuscript, Tancho, a meditation on the atomic bombing on Hiroshima and Nagasaki at the end of World War II. “It’s roughly in thirds,” he explains. “The first is about the bombings at Nagasaki. The second recounts my experience at the Hiroshoma Peace Park, where I visited in the 90s. The last section is about forming an origami crane. The Japanese word for the red crown crane is tancho.

The judge for the Synder prize was well-known poet Alicia Ostriker. About David’s work, she wrote: “Tancho is a book that needed to be written and needs to be read. Its account of terrible beauty is itself beautiful, speaking of ‘hope and despair, the promise of each to other.’ Nagasaki, Hiroshima, ‘ruined human beings,’ a peace park, a sounding bell, a thousand paper cranes. Does the arc of history bend toward hope? One of the many haunting poems in this book describes the body of a boy in one of Yamahata-san’s photographs of Nagasaki after the bomb, and concludes with a haiku:

There are butterflies
warming in broken sunlight–
wake up, child, wake up.

Perhaps we, all humanity, is that child.” [Note: Yōsuke Yamahata was a Japanese photographer best known for photographing Nagasaki the day after the city was bombed.]

We inquired how poems come to him. “Most people who write poetry say that can’t be answered, and I concur,” he says. “You don’t know where it comes from.”

David and his wife have lived in Menlo Park for the past eight years. They discovered the Willows after living in Palo Alto. “We love this neighborhood,” he says. “It’s a real neighborhood. It’s just great.”