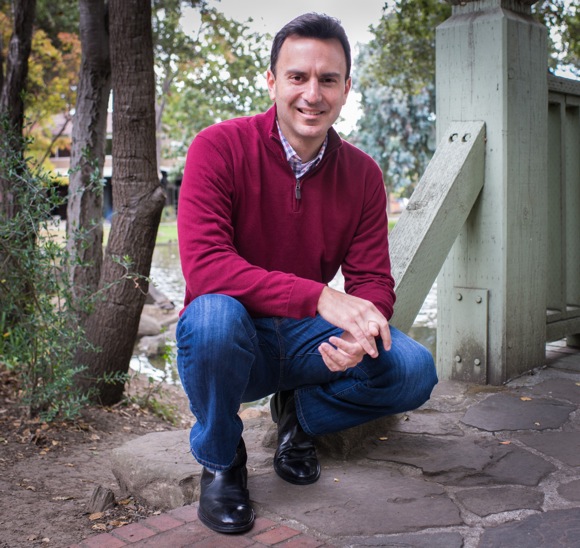 Editor’s note: While InMenlo doesn’t cover politics, we do like to catch up with local elected officials in non- or post-election years. It’s been our practice to talk with Menlo Park mayors as they are leaving office, so we sat down with Council member and Mayor Ray Mueller earlier this month. His last day as mayor is December 3.

Ray was elected to a four-year term on the City Council in 2012. Outside of his city government duties, he is in-house counsel at a pre-IPO technology company. He lives in west Menlo with his wife and two children.

InMenlo: Given your additional duties as Mayor, how have you juggled civic, work, and family responsibilities?

Ray: There is no way you could do this without support of one’s spouse, and my wife has been incredible. It’s a labor of love for her. She doesn’t get the recognition that an elected official gets, but she cares a lot about the City as well.

InMenlo: What have you learned politically in the past year while serving as Mayor?

Ray: We have an incredible constituency here in Menlo Park. People appreciate an explanation of what is going on and have quite a lot to contribute. So, I’ve learned to always take the time to listen and explain what’s going on — and never underestimate that they care and will get up to speed very quickly

InMenlo: What did you learn personally?

Ray: Personally as mayor it’s been a difficult year what with Meausre M and the acrimony.  I learned when people are upset, you really just need to be patient. Continue to listen and resist the urge to defend yourself and be aggressive. Do not take what is being said about you personally.

Some accused me and my fellow Council members of not caring, that we didn’t care about the City. I live here and am raising my family here — and I care very much.

As a public servant, I know I’m not the smartest person who lives in Menlo Park. But people elected me because they believed I care about the community and would use good discretion as a council member. I take that seriously.

Throughout the election, more often than not people were coming from an authentic place. My great hope now is that people will start collaborating.

I view the election as an affirmation that the people feel the Council will do their job. That we will look at the issues very carefully. That we will continue to work to bring vibrancy to downtown and build a sustainable model for the future.

InMenlo: What are you most proud of?

Ray: We accomplished so many things this year, but I think one of the biggest is that we’re changing the psychology of downtown. People are starting to think that something may be going on downtown — and they’re right. We re-started the holiday  tree lighting ceremony and had the Family Fitness Fair in addition to the downtown block parties. And we had the State of the City downtown. [Here are two videos shown at that event: one on honoring local heroes before each Council meeting and the other on innovative firsts that occurred in 2014.

InMenlo: Would you explain the thinking behind the planned cultural exchanges?

Ray: We’ve entered into cultural exchanges with Xinbei, China, and Kochi, India, and are working on Biezen, Japan. We sent art and exchanged pieces of each other’s culture.

Menlo Park may be a small town of 32,000, but we are a multi-cultural, multi-national city of the best and brightest who live and breath innovation — and the world recognizes that fact.

Building dynamic relationships between international prosperity centers on a person-to- person basis builds the type of trust that lays the ground work for collaboration on both an economic and political level between regions.

Ray: I encourage people to get involved, to interact with Council members. Don’t let the environment that started to take hold continue. There are many things to be accomplished — and we need everyone.