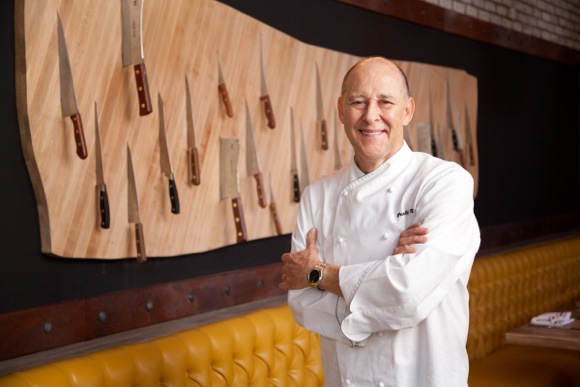 The knives that grace one wall of Bradley’s Fine Diner (BFD) “just showed up one day,” according to the restaurant’s namesake, Bradley Ogden. “Same thing with the chandeliers,” he continued, referencing the distinctive lighting fixtures made of cutlery in a room that can be used for private dining.

Chef and restaurteur Bradley Ogden may have only recently landed in Menlo Park with the opening of Bradley Fine Diner (BFD) in November, but he’s been eyeing the space for two decades.

“I think it was in 1995 that I first looked at the space, but we couldn’t come to a resolution,” he said in the restaurant’s empty dining room around noon. That won’t be the case for long; starting tomorrow (1/3/15) BFD will be open for brunch/lunch as well as dinner.

According to Bradley, he and his staff, led by chef Brent Balika, are still ramping up and tweaking the menu. “Our goal is to make it an every day restaurant so that our patrons can dine here frequently.” 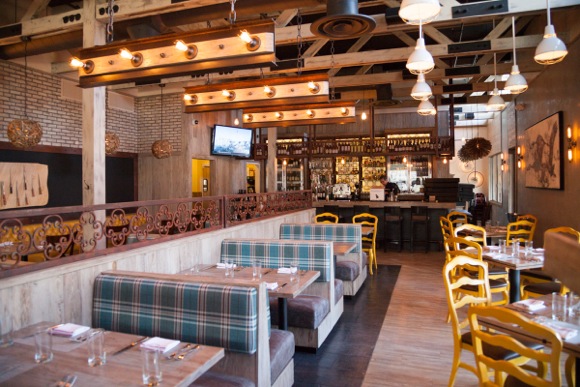 Bradley came to cooking via music, so to speak. He was one of Elmer and Elsie Ogden’s seven children. They operated a music club in northern Michigan, and he was much influenced by Midwestern cooking as well as summers spent on his grandmother’s farm in Windsor, Ontario.

“My twin brother and I both applied and went off the Culinary Institute of America (CIA) in Hyde Park, NY, together,” he says. “He lasted just four months. I didn’t finish directly but quit to do more cooking before graduating.”

At that graduation, he was honored with the school’s Richard T. Keating Award given to the student most likely to succeed; a long list of well-known restaurants, including the Lark Creek Tavern, One Market and Yankee Pier, attests to the worthiness of the award. “Not bad for a kid who lacked confidence and stuttered,” he says.

Given his culinary achievements, we expected to hear about some famed dish or recognition when we asked what he was most proud of. Instead he told us about going back to the CIA with two of his three sons, who had also become chefs. “Bryan and Chad both attended CIA, too,” he says, “and we went back to do a cooking demonstration. That was really the biggest thrill of my life. When I heard our names announced, I almost didn’t make it out onto the stage, I was so filled with emotion.

“I’ve loved being in this business, but it took me away from my family. I give lots of credit to my ex-wife, Jody. If it wasn’t for her support, I wouldn’t be here today.”