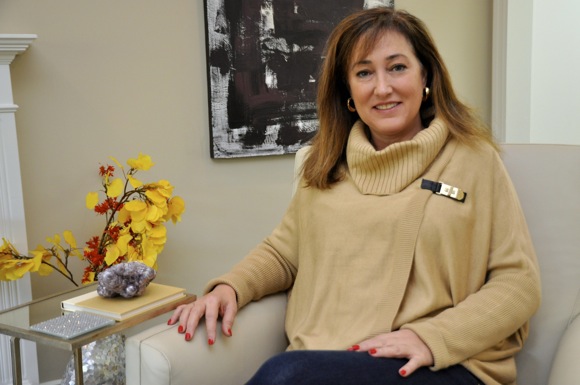 Meeting Apeville Media founder and Menlo Park resident Fran Compagno earlier this week, it was immediately clear that the time was right — but the setting was wrong. We were in her lovely home when a sports bar would have been better. It’s there she’s hoping the casual female football viewer will take advantage of her new app, FootballBFF.

It was at a bar, the Old Pro in Palo Alto, that she had the idea for the app. “I was there watching the 49ers with some girl friends,” she recalls. “The announcers had lots of stats but not what I was interested in knowing. I wanted to know the good, the bad, and the ugly about all the players on both teams. The information was out there, it just wasn’t in context.”

FootballBFF delivers real time, interactive, and light-hearted content about teams in this year’s playoffs. It allows users to have micro-conversations with their girlfriends while watching as well as providing just enough background to enjoy the game and converse with more serious viewers.

Fran has lived in Menlo Park “on and off for 20 years” and in her current home the past four. She’s worked as a researcher in biology, did a stint at an Internet startup, and got a second masters (biology was the first) in psychology when she was a dating coach.

“But I’ve always been interested in football,” she says. “Not so much the game but the social aspect, getting the gang together to watch Monday night football.

“I think it’s the excitement around the event. Even though I’m not a huge Stanford fan, you can sense the electricity in the air here in Menlo when there’s a home game.”

The play0ff-focused current app is a test market for expansion to full season watching in 2015-16. “We’re eager for feedback,” Fran says.

The FootballBFF app is available to download for free for iPhones and iPads through the iOS App Store.

This is aweseome Fran! Way to go..

Fran –
This is brilliant and just what we all need! xx