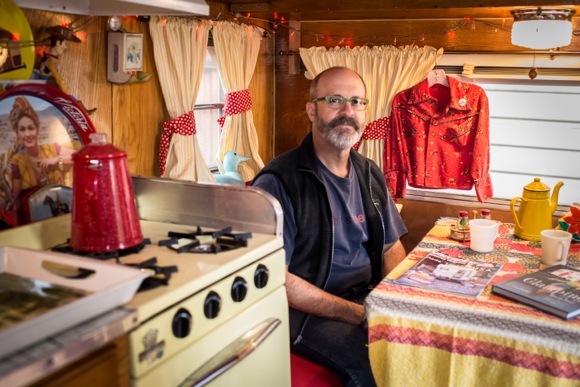 David Lehmann and wife Soni Bergman don’t actually live in their 1958 Diabl0 trailer nicknamed Rosarita — even though David describes it on his business card as “our little house on wheels.”

“We’ve had it for three years and do take trips with it,” he says while showing his visitors the spiffily-decorated interior. “We took four this year. Each time we have to back it down the driveway by hand.

“When it’s here, it’s our spare bedroom. We sit out here sometimes and watch Neflix.” 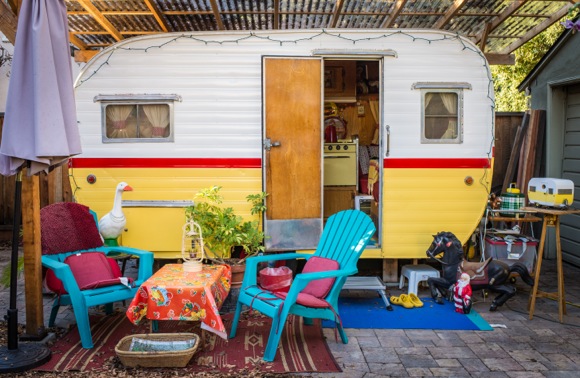 David, who came to the Bay Area to attend Stanford, is a graphic artist by profession but from  a look around his home, it’s clear he’s an artist by avocation. He builds furniture and tree houses and was creating a wind tunnel Christmas present for a friend’s child when we visited.

He works from home, and originally the Diablo trailer was going to be his office, thereby freeing up the spare bedroom for company. “Then we realized the trailer was already a bedroom,” he said. “If we’d converted it to an office, we couldn’t take it on trips!”

I own a 1959 Diablo, recently restored. I would like to share research as I have never found another, Been looking for info since 1989 when a bought this jewel.

I just bought a 1959 Diablo and don’t know anything about it. About to start restoring it…please pass on any information that you think would be useful…thanks!

The Diablo travel trailers were designed by my uncle, John Jordan. He was the Chief Draftsman for U. S. Steel in Pittsburg for many years. He and a partner had a small operation on Willow Pass Road in West Pittsburg/Bella Vista, CA, an unincorporated area now known as Bay Point. I was in elementary or intermediate school at the time. Don’t remember how long they were in production, but I’m fairly certain they were out of business by the time I started high school in 1961.

Stephanie- we recently found an old diablo, and I can’t find anything, anywhere about them. Is your uncle still alive, and would he ever be willing to answer a few questions via email??

Hello, Heather,
John Jordan, my father, designed the Diablo travel trailer in, I believe, 1957. At the time he was a project engineer at U.S. Steel. In fact, he superintended construction of a $59 million dollar mill. I think it may have been the only thing Posco kept when it bought the Pittsburg operation. My cousin Stephanie is right about him having been a draftsman but that was in the forties. He also designed a drive-in in Pittsburg, the Pirate Drive-in fast-food restaurant in the early fifties. The design was used in Antioch to build the Panther Drive-in some time later. He had partners in the Diablo trailer operation. They were a a husband and wife named Mitchell. I think, in fact, they were Paul (Mitch) and Pauline Mitchell. The partnership ended about 1959 or 1960 after disagreements over d sign of the structure of the trailer. My father had a reputation for overbuilding and I think that was what scotched the arrangement. I think only about 50 Diablo trailers were ever built. I’m guessing that people who have one now don’t think they are overbuilt. If I can answer you in any way don’t hesitate to ask.

What about the toy Diablo – or anway that’s what it looks like – sitting on the table at the right of the photo? Was it a bonus that came with the full-size model back in ’59?

Diablo co-owner Mitch died and Mrs. Mitchell could not come to an arrangement with my father John Jordan on their partnership. The issues of being overbuilt were being resolved when Mitch passed away. My dad was building a new jigging system that would accommodate lighter weight materials when operations ceased. Reviewers did feel the “Devil of a good trailer” had too much tongue weight. Would be interested to know what owners think.