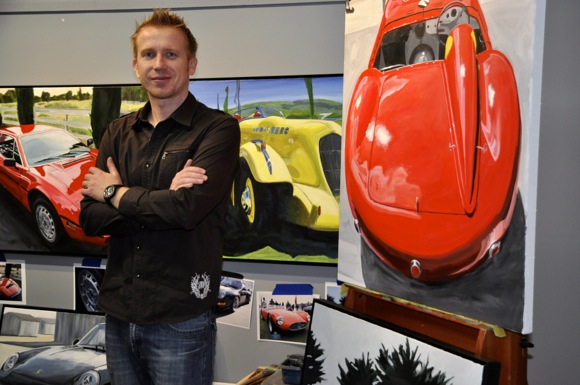 By artist James Caldwell’s own admission, “Cars are my thing. It’s hard to say when my obsession started,” he explains, standing amidst a studio jam-packed with portraits of automobiles.

“Painting cars is fascinating to me. Reflective objects are some of the hardest to capture.”

James, who grew up in Woodside and now lives in Menlo Park, has been focusing on cars since 2007, but has painted since he was quite young, following in the footsteps of his father, landscape painter Jim Caldwell, who we profiled in September, 2014.

About 50% of his work is commission, which he particularly enjoys. “We use a location that’s meaningful to the client,” he says. “I choose the time of day, depending on the light. And I get the added benefit of riding in the car to the location.” 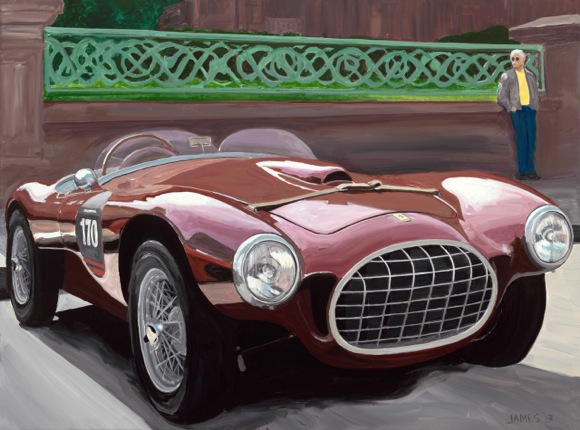 When not on commission, he chooses his subjects by attending car shows and various concours events, where he often shows his works.

“I often paint black cars,” he says. “In the bright sun, the car shines like a mirror. By contrast, a red car benefits from lower light. I often suggest a sunset setting.”

Does James have a favorite car?

“That’s really hard but I guess one of my all time favorites is the Porsche 550 Spyder, the car James Dean made famous by crashing. But I also find race cars from the 50s to be very inspiring.”

James’ work can be viewed on his website and locally at AutoVino. For a different perspective, check out his appearance on Jay Leno’s Garage.

Painting (30×40) by James Caldwell is 1951 Ferrari 212 Export Spider with a Fontana Body, The car was parked in front of the Pacific Union Club in San Francisco about to take part in the California Mille.