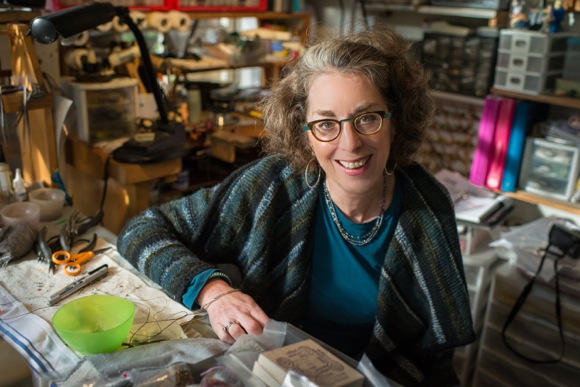 Jewelry designer Soni Bergman, who’s lived in Menlo Park for about 20 years, has art in her genes. Both her grandmother and mother are artists, the latter accomplished enough to have a piece accepted at the Museum of Contemporary Art in Chicago.

“I pursued fine arts in college. Printmaking, to be exact,” she explained. “Later I came West with some girlfriends and ended up working full time as a technical illustrator.

“But I was yearning to get out of high tech and started buying beads and making things for fun. Then in 1999, I got into the Menlo Park Connoisseur’s Marketplace. I quit my job two weeks later!”

Soni sells most of her jewelry through shows. She does about a dozen a year, with winter being her slow time. She also does home shows and invites customers to visit her studio after looking at her jewelry online.

“What makes my jewelry stand out is that I work a lot with precious metal clay, adding beads and gemstones to pieces after firing. The jewelry is organic and earthy.”

Soni’s husband David built her backyard studio, using salvaged French doors and other reclaimed materials. “It forces me to go to work,” she said with a smile. “I try to spend at least four hours a day, including weekends when I’m preparing for a show.”

Sometimes she collaborates with David, who has started his own jewelry line. “He has much more of an engineering mind, much more three dimensional. Sometimes that comes in handy when he finishes something that I’ve started!”