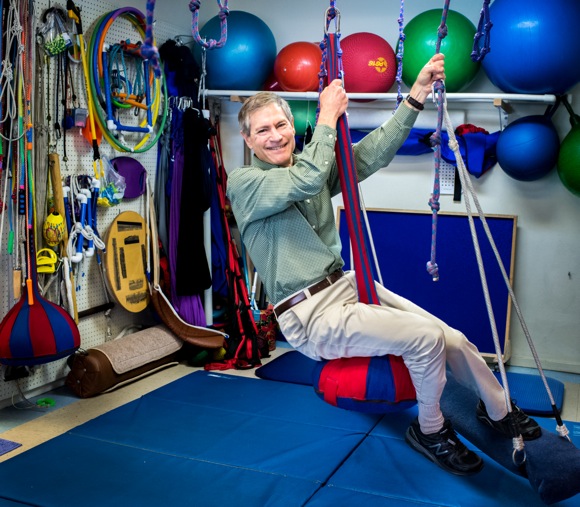 Jeff Marks, the owner of PlaySteps for Developing Kids in Menlo Park, admits that, on first hearing, occupational therapy for kids may sound a bit confusing, given that OT is most often associated with work.

“Yes, it may seem like an odd thing to send your child to vocational training,” he said. “But think in terms of what is interfering with day-to-day living, what occupies a child’s time. For a child there are three domains — school (their work), play and self-care.”

Kids most often are referred to PlaySteps by schools, where teachers observe kids avoiding tasks. “Parents might say, ‘Isn’t that just his/her personality?’,” said Jeff. “But kids quickly learn that it feels better to try to fail and succeed than try to succeed and fail.”

At PlaySteps, which is housed in a cottage on Menlo Avenue, there are different rooms for teaching different skills. Programs are offered that support development in the areas of sensory processing, motor coordination, and other functional skills. Clients range from toddlers to teens, with most falling in the three-to-10-year range.

Before taking over PlaySteps from its founder, Barbara Fourt, two years ago, Jeff had been director of a small group home, also focusing on children. “I’ve always loved working with kids,” he said. “It gives me great joy to see kids thriving, to see kids who would otherwise be limited succeeding in life, becoming confidant, recognizing that inherently they have great value as individuals.”

Given his long history in working with children, we asked what changes he’d seen over the past three decades. “Children are not given as much freedom to explore,” he said “They are not doing as much with their hands, learning to manipulate objects. We are seeing more children who have challenges with fine motor development.

“On the flip side kindergarten is the new first grade. That works ok for many, but for those kids who are further behind developmentally, it creates a sense that something is wrong with them. So they avoid the task(s).”

More information about the services offered at PlaySteps is available online. PlaySteps is also offering a special class for babies five to 12 months old and their parents/caregivers through the City of Menlo Park.