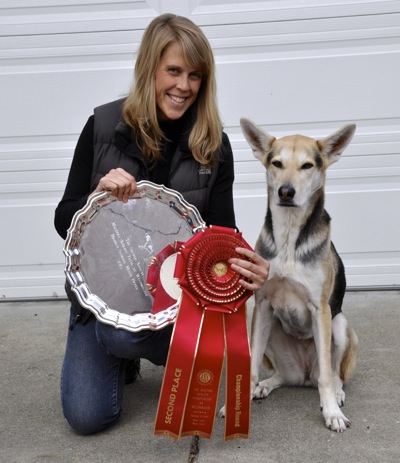 The mixed breed dog R00!, owned by Menlo Park resident Stacey Campbell, has become known as one of America’s mutt superstars. She made history in 2014 when she won the first “Best All-American Dog” award trophy at the Westminster Kennel Club show — and did it again this year.

Roo! was entered into the Masters Agility Championship, taking a first in her height category (24 inches)  last year and a second this year. The competition involves dogs being timed as they maneuver through an obstacle course.

Stacey adopted Roo! from the San Francisco SPCA, after seeing something in her, even though she was “rude, jumpy and mouthy.” The owner helps tell Roo!’s story in a blog post on her website.  She originally trained her in obedience where she competed successfully before turning her talents to agility.

We should mention that Roo!’s success is undoubtedly a result of her owner. Stacey operates Go Fetch Dog Training, which she opened in 2007, offering her services to dogs of all ages, sizes and breeds. “I deal mostly with behavior problems,” she says. “These are the kinds of things that dogs and their owners can’t address in a group class. For example, coming when called is a common problem.”

Behavior comes down to attention and focus, Stacey explains. “One common mistake people make is that they think if a dog understands and behaves at home, he or she is going to demonstrate the same behavior out in the world. But that’s not always the case.”

She also stresses the importance of a good relationship. “If you’re giving your dog cookies one minute and yelling at him the next minute, it detracts from building that good ongoing relationship.”