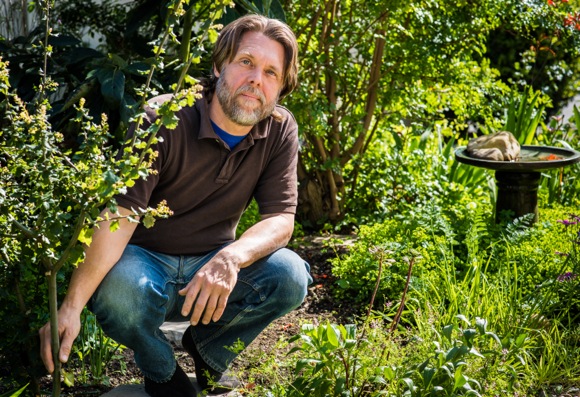 We’d come to view Menlo Park resident Nick Turner’s deep nature garden in part to search for butterflies. Another Menlo resident, filmmaker Dorothy Fadiman, has produced a new film, Butterfly Town, USA, which will be having a free premiere on Thursday, April 2, co-sponsored by the Sierra Club Loma Prieta Chapter. The film chronicles a community of activists in Pacific Grove, California, who take dramatic action to save their famous Monarch Grove Sanctuary, an urban preserve located near the City Center.

“Dorothy’s film about the monarchs underscores a much larger problem, as the sheer number of insects in North America is declining dramatically,” said Nick, who spent three decades in the tech industry before changing professions.

And while offering eco-system garden consulting may be a fairly new pursuit for Nick, gardening is not. “I’ve been gardening since I was three years old,” he says. “Sometimes I’ve only had a few containers, but my gardens have always been eco-systems. I don’t pull things out — there is no such thing as a weed in a deep nature garden.

“It’s not just about gardening to me, it’s about creating and preserving — where nature can exist with a human steward.”

Nick has a container garden on the large porch of his apartment as well as a garden plot downstairs. “I took it over about six years ago,” he says. “It’s been allowed to grow a little bit wild, but it’s also a working garden. Normally a garden that’s this age doesn’t have as much bare space. But it’s here that I cultivate new species for my clients’ gardens.

“My premise for all the gardens I create is that every species deserves a place.”

More information about Nick and deep nature gardening is available on his website. Dorothy’s film, along with presentations by Nick, Lauren Swezey of Facebook and Gita Dev of the Sierra Club Loma Prieta, will screen at the Lucie Stern Community Center at 7:00 on April 2 preceded by a light dinner at 6:15. She requests that people planning to attend RSVP: concentricApr2@concentric.org.

Oh, and yes, a butterfly did flutter by while we visited with Nick in his garden.