Amanda and Rickey Martinez open popular Truckee restaurant, Squeeze In, on the Peninsula 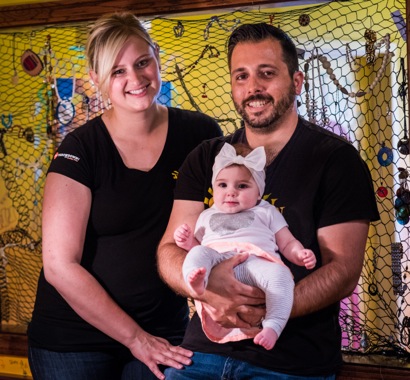 Rickey Martinez was in Tahoe for a wedding in 2006 when his aunt and uncle asked him to help out at their restaurant in Truckee, the Squeeze In, much loved by summer and winter vacationers as well as locals. He quickly spotted a pretty blonde hostess named Amanda.

That started a chain of events that now finds them married (in 2012), the parents of six-month-old Savannah, and Managing Partners of the newest Squeeze In location at the Marsh Manor Shopping Center. The restaurant opened two weeks ago, serving breakfast and lunch daily, but will have its official grand opening on March 30.

That the Squeeze In has come to the Mid-Peninsula may sound incongruous given that the other four restaurants are in the Tahoe/Reno area. The story behind the story is that it was one of their biggest fans who brought them here. Robin Soran, who manages Vibe Yoga, at Marsh Manor, alerted the Truckee ownership (Rickey’s aunt and uncle) that there was space opening up for a restaurant at the center. Robin is only one of the 5,000 members of the Egghead Club, the restaurant’s loyalty program, already located within a 50 mile radius.

The Squeeze In is noted for its wild decor — wooden cut outs of aliens as well as a little bit of this and that.  “There’s been a kind of tradition,” said Amanda, “if you have something to get rid of, drop it off a the Squeeze.”

All Squeeze Ins are opened from 7:00 am to 2:00 pm. And while the breakfast menu is extensive, and lunch, too, has many options, it’s the omelettes with the fanciful names that lure many through its doors..

According to Amanda, the Racy Tracy is at the top of the favorites list. “It was named after a Truckee woman,” she said about the omelette described as “classic California” made with sautéed mushrooms, Monterey jack cheese and bacon, topped with avocado.

“The Squeeze In in Truckee has this great vibe, built up over 42 years,” said Rickey.”There’s almost this magnetism about it. That’s what we hope to bring to diners here on the Peninsula.”