by Stephanie Lucianovic on April 1, 2015 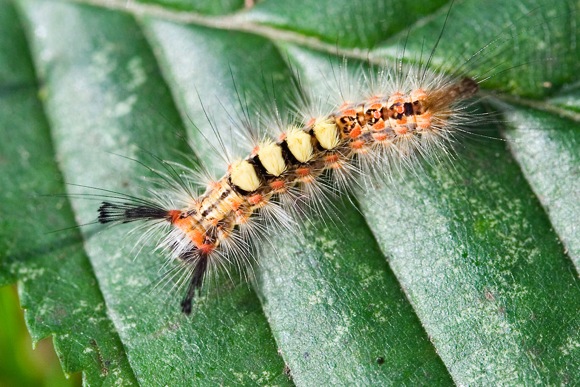 In 2007, Andrea Gemmet wrote a piece called “Don’t Touch the Caterpillars” in the Almanac. This past weekend, my five-year-old has been fascinated by all the little fuzzy caterpillars coating every play surface in Burgess Park playground.

He has petted them, let them crawl on him, and examined them from all angles. Yesterday morning he woke up with a horrible rash that, in absence of all other symptoms, we all assumed was Poison Oak. However, the Urgent Care doctor didn’t think it was Poison Oak and, in fact, she was so stumped that she called in another doctor who also couldn’t put her finger on it. They knew it wasn’t serious and recommended some home care.

However, last night, I found the old Gemmet article — written before we had moved down here from San Francisco and before we had bug-fascinated children — and realized this must be the culprit.

I immediately emailed our doctor that the mystery was solved, and she responded that she hadn’t seen caterpillar contact dermatitis in several years but it is now back on her radar screen. She went on to say that the CDC recommended “treatment recommendations include placing adhesive tape over the affected area and repeatedly stripping the tape off to help remove the tiny hairs, washing the area with soap and water, applying ice packs to reduce the stinging sensation, and applying a topical, low potency steroid cream.” However, our doctor added that “the tape procedure might be overkill. I actually haven’t advised it with past patients, and they all seemed to clear uneventfully within several days. ”

Anyway, for all those kids out there who are bug-lovers like mine, their parents might want to be wary since it seems like Menlo Park is having another infestation of the tussok moth caterpillars.