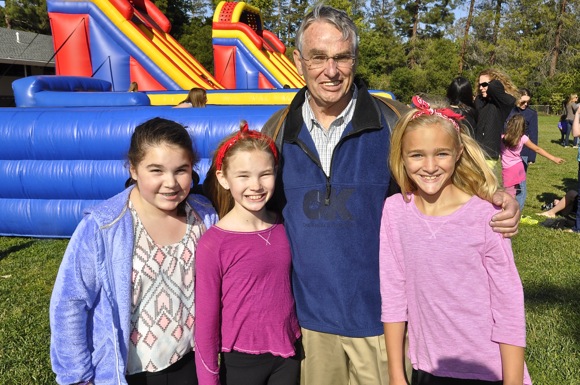 Wandering over to Oak Knoll School late this afternoon, we encountered a youngster sitting on the perimeter of the festivity surrounding the retirement of the school’s principal, David Ackerman. “Why was she there?” we asked. “Because he’s the best principal ever,” she replied. “He told my parents that he wouldn’t retire until I was in 5th grade, and he kept his word!”

That summed up the heartfelt thanks going David’s way as the school celebrated the retirement of the principal who came their way in 2002, two years after coming to the Menlo Park Atherton School District, first serving in the same capacity at Encinal School. David began his teaching career in St. Louis in 1970 and subsequently held administrative posts in Missouri, Seattle and Virginia.

While some retirement sendoffs are marked by champagne and creme brûlée, David was treated with his two favorites — Diet Dr. Pepper and Ding Dongs.

David has been an amazing principal and leader in MPCSD and we have been so fortunate to have his wisdom, energy, and passion. Wishing him much happiness in the next season of this life!!