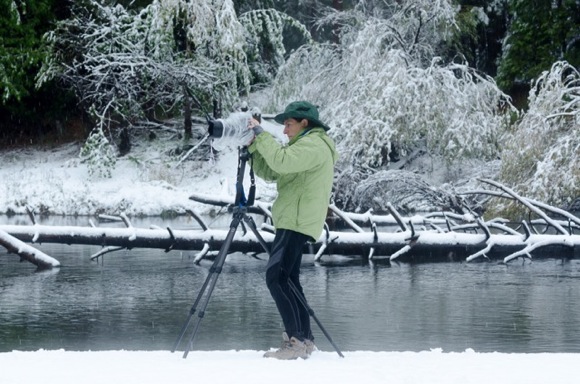 We at InMenlo have been fortunate to have Menlo Park resident Irene Searles as a contributing photographer for the past three years. When we first met she’d just taken a portrait class through Stanford Continuing Education with Neal Menschel and wanted to flex her newly-learned skills. She returned to Stanford this Spring where she took a landscape photography class from commercial photographer John Todd. (She’d taken a sports photography class from him last year.)

The landscape class met a couple of times before the entire class headed to Yosemite for the weekend, where they were greeted by a spring snow storm. The following Wednesday she returned to the national park for an overnight. 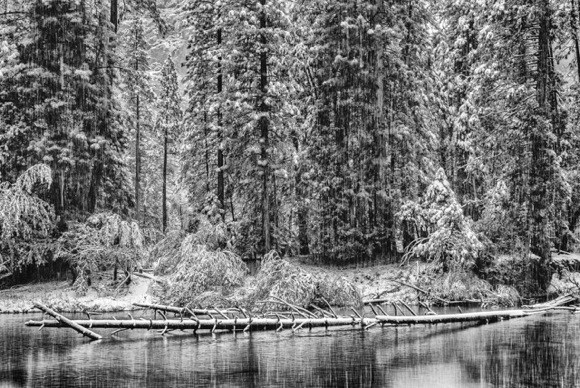 Explains Irene, who calls herself a “photographer in progress:” “I returned because I didn’t feel I captured the images I wanted. I’d made mistakes and wanted to go back right away.”

Ironically, when it was time to share her images with the class, those she liked best came mostly from the first trip.

“One of the things John talked about in class was how important it was to Ansel Adams to pre-visualize the photo before taking it,” she said. “Rather than take a snap shot, you look at the scene and compose how you want it to look. I didn’t feel I’d done that enough on the first trip.”

Another takeaway from the class was how much work goes into creating the final image after it’s been shot. “I created the images in raw image format,” she explains. “The images are minimally processed and not ready to be printed until edited.” 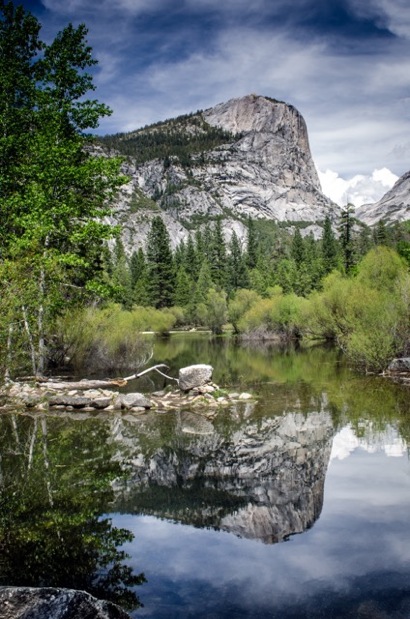 Sitting down with Irene, we reviewed the images together and selected four to share with InMenlo readers as part of the Photography Explorations series. Irene provides comments on each.

Snowy log on the Merced River: I composed this with the tall line of trees in the background, then the log and water in the foreground. It was so cold, snowy and wet at the time! Using a slow shutter speed stopped all of the motion of the snow to reflect the line of trees. Black and white allows you to extenuate the movement more than you could with the color image.

River rocks in color: John asked us to bring neutral density and graduated filters. But first you have to figure out how to use them — I watched lots of videos! The shutter was open for four seconds allowing me to capture the effect I wanted — the ethereal look of flowing water offset by the rocks.

Mirror Lake on sunnier day: This was taken on the Wednesday trip back to the Park. It was a beautiful day with a mix of blue skies and clouds. Seeing the reflection in the lake gives layers to the photo. 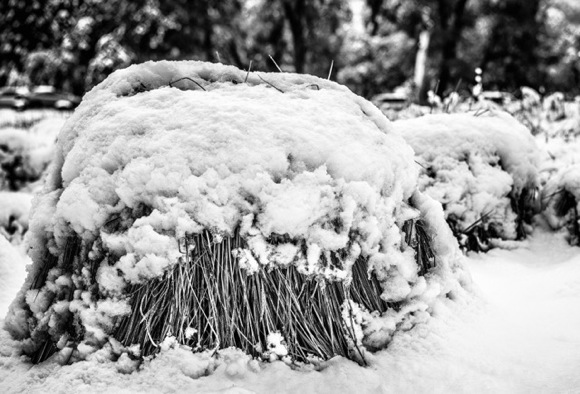 Straw mounds with snow: The class was walking towards one of Ansel Adams’ favorite spots, and we came upon these mounds that had been covered with snow. It was almost like they were huge rocks! I like the speckled blurred trees in the background and that you can almost feel the wet snow when looking at the photograph.

Photo of Irene in action by classmate Cynthia Yock; all other photographs by Irene Searles (c) 2015; used with permission