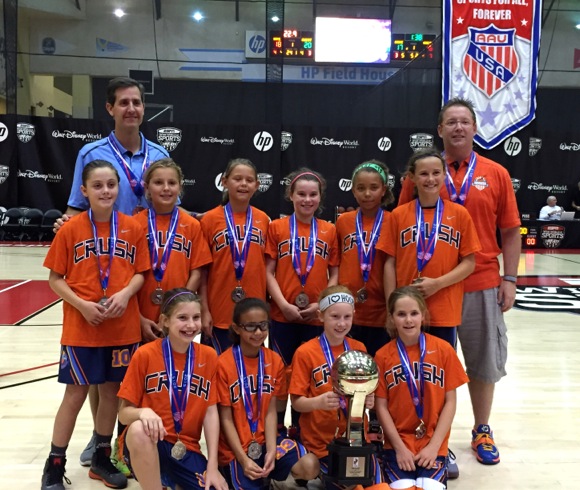 The team, which started when most of the girls were in 1st/2nd grade, took ninth place as 3rd graders at last year’s National Championships. At the AAU tournament, they defeated teams from Ohio, Missouri, Virginia and Tennessee, before losing to a team from Georgia.

“To our knowledge CA CRUSH TNT is one of the few — if not the only — California girls basketball team to have ever played in an AAU National Championship game and/or finished 2nd in the nation,” emailed assistant coach Grady Burnett (pictured left with the team; head coach Joshua Brumm in on the right).

The CA CRUSH TNT is not a professional basketball club or program but rather the team was started by the two coaches  for their daughters and their friends. During the season they practice two times a week.

“The team played in 49 games this year,” said Josh. “In those 49 games, they lost only six times to top 4th grade teams. On average, they outscored their opponents by 18 points, averaging 31 points per game and allowing 13 points per game. The best part is we played more than half our games against older 5th grade girls teams, as well as some boys teams.”

Added Grady: “The 2015 season has been amazing. They’ll stay together and play as fifth graders. They’re great kids and are having a blast and learning a lot together as a team.”

Congratulations!! I know some of those ladies from their days at Las Lomitas.

Hi my name is Delaney. I play for the ca crush I’m am # 23. I had so much fun playing in the national championship. All of the teams we faced were very good teams. we played girls that were at least 5 foot 10. before the national championship we played as 4th graders in the 5th grade NJB all net. The teams were so good.
we also played some boys teams, the game was a lot faster. my favorite part of playing the boys is when other people come over to our game and say “are those girls playing boys? those girls are good”
The scariest part of the the national championship is when we played the angles and it stared to rain outside so all of the baseball players came inside to watch our game. so there was alert 400 people watching us. all of the seats were filled.

We cannot permit players to switch teams once teams are announced without the approval of the Basketball Athletic Director. Player Evaluation Days are held on a Saturday Sunday, towards the end of October.