Over a year’s time, Menlo Park resident Beth Martin lost four dogs. Twelve or so months later, she started thinking she was ready for a new dog in her life but had a firm opinion about puppies: “They’re a joke. They pee everywhere and eat everything.”

Through a friend who had worked on the fundraiser, Haute Dog, she was introduced to Muttville Senior Dog Rescue. “I liked the idea that they were focusing on animals that needed help most,” she recalled. “The main reason these dogs aren’t being adopted is because of age.”

Two and a half years ago, she called the folks at Muttville and told them she’d like to get involved, which has led to her fostering dogs and adopting what she calls “two failed fosters,” Flora (shown below modeling at the Haute Dog fashion show) and Stevie Wonder, “failed” in the sense that instead of fostering she adopted them. They’ve joined a non-Muttville dog and a cat to make up Beth’s home menagerie.

Beth explained that Muttville needs foster homes because of limited space at their San Francisco facility. “They usually have about 70 dogs up for adoption at a time,” she said. “Fostering a dog involves bringing them home, feeding and loving them.” 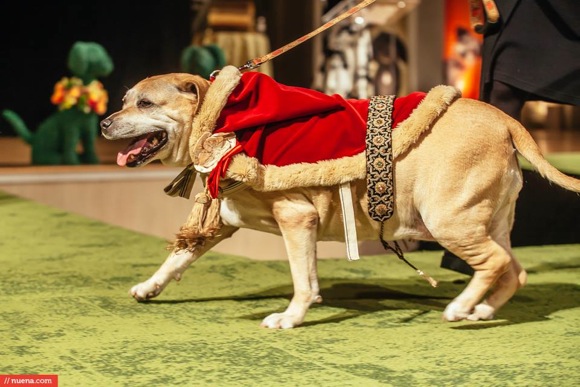 Over the course of her involvement, she’s fostered 14 dogs. “To be honest, a few of them I was glad to see go,” she said. “More so because I knew they’d found their perfect home, even if it wasn’t my home.”

Beth emphasized that Muttville provides medical care for the dogs and the food and accessories that would allow most anyone to foster a dog. “A potential foster goes through an interview process where they ask you about your schedule and home environment and tell you everything you need to know about fostering a dog,” she said.

“The key to fostering is having the time, patience and compassion for dogs who aren’t as spry as they once were. But they were once someone’s good pets, and they can be good pets again in the right home.”

On August 29, Muttville will be hosting its 7th annual Moolah for Mutts with the theme “Muttville’s Senior Prom” at the San Francisco Design Center. You can purchase tickets online.

Photo of Beth and her Muttville dogs by Irene Searles

I love the older dogs at Muttville, that otherwise might not have gotten another chance!