Semester system colleges across America start classes over the next two weeks, which means that parents are parting ways with their kids and sending them into new and unfamiliar territory. For worried parents and discerning freshmen, news reports about crimes on and around campuses, especially in urban areas, are unavoidable.

It’s no coincidence that a parent on every college tour embarrasses their child by asking the guide what the school does to keep students safe. The blue box system that most schools employ has felt woefully inadequate for years, and the leading safety apps contracted by progressive schools have failed to gain students’ trust and tend to be valuable only when tied to the campus police station. 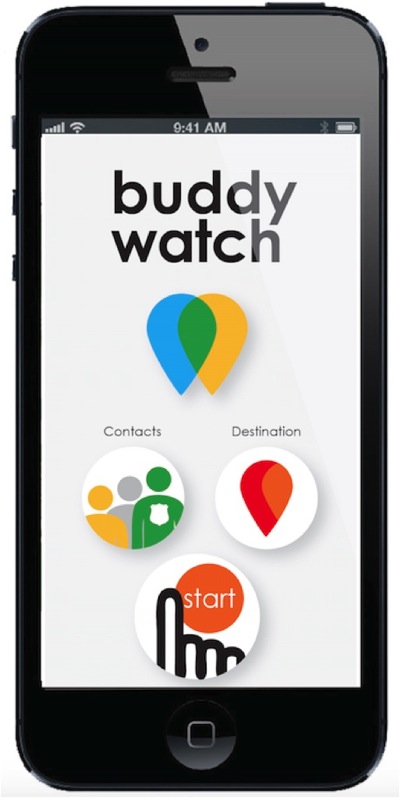 Enter Buddy Watch, conceived of by Menlo-Atherton High School grad (and Grab Bag Theater founder) Hannah Rosenfeld and her co-founder Shruti Patel. They’re launching a Kickstarter campaign today for early seed funding for what they call a “smart personal safety application” that allows college students to share information only with the people they trust when they need it most — parents back home, RAs, or their roommate.

Explained Hannah, who’s back in Menlo Park following graduation from the University of Virginia: “Buddy Watch is intuitive and intelligent, using GPS and accelerometer data to automatically identify and respond to emergencies even if the user can’t reach his or her phone.”

To build a consistently reliable and easy-to-use app, co-founder Hannah spent over a year working with police, students, and campus safety departments including her own University of Virginia’s Safety Committee following the abduction of fellow student Hannah Graham last October. Shruti, also a recent UVa grad, joined the team after learning about the project from her sister.

“I began thinking about a smart application of a dead-man-switch type trigger, and took that idea to AngelHack Silicon Valley 2014, where my team won the grand prize and went on to complete their pre-accelerator while refining the idea through research with safety officials and students,” said Hannah.

She continued: “Buddy Watch makes traveling alone safer and easier by detecting emergencies as they happen using the sensors built into your phone. You can choose the right emergency contacts for the right time, you don’t have to trigger a panic button, and you aren’t giving up your phone’s battery life or personal data.”

More details about BuddyWatch are available on its Kickstarter page.