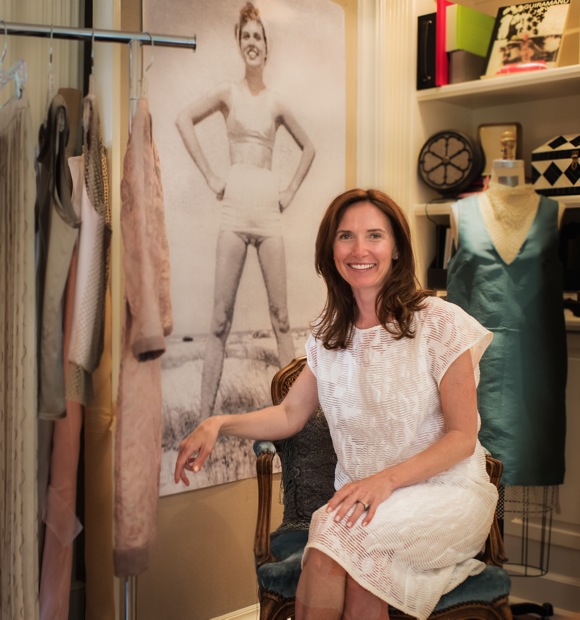 Atherton resident Carley Rydberg set a goal for herself. By 40, she would shift from being a full-time mom to starting her own business, specifically as a fashion designer. She’s on the threshold of achieving that goal.

“We moved to the Bay Area from Singapore, and that’s where I studied fashion design and had my first [of three] children,” she says. “My first born is now an 8th grader. I always knew I was going to do this eventually.

Carley plans a soft launch of her clothing line for the upcoming holiday season and a full roll-out in Spring, 2016. Her designs will be sold in boutiques across the country. A portion of her profits will go to efforts in the area of dyslexia. “I’m dyslexic and so are two of my sons,” she explains.

Like other startups, her company is in stealth mode, but she was willing to talk about her designs in broad stroke: “I’m drawn to sophisticated simplicity — classic silhouettes with a hint of something modern in them.” One example is the dress she was wearing the day we visited.

One of Carley’s inspirations is her grandmother (in swimsuit in photo). “She embodies all the characteristics of the women I’m designing for,” she says.

She drew further inspiration from attending ReBoot Accelerator for Women. She recalls: “I walked into a room with 50 other women who all were interested in starting new ventures. Within just a day, I felt such on outpouring of support. And I took away a lot of skills — mainly in technology — that made me more capable and relevant in today’s business world.”

As Carley has transitioned from stay-at-home-mom to business woman, she says one thing has most surprised her: “My children have been so encouraging. It almost feels like role reversal. They tell me how proud of me they are!”

Congratulations Carly! Extremely proud of you and your endevour! We will continue to follow you! Prayers for much success!

Hi Carley. It’s Christine O’Brien here. Your old friend from Singapore. Congrats on your clothing line. Hope it s going great. It was so good to catch up with you and Paul and the family a few years ago now.

Email address is mcvsaobrien@bigpond.com. All the best.
Christine